The hollow-eyed, snake-bearded death mask of Tutankhamun, gleaming with gold, is so often replicated that it packs less punch than a scrunched-up ball of papyrus for western audiences these days. Its ubiquity as a symbol of ancient history makes the Ashmolean’s set-piece exhibition this year a bit of gamble. Whether it is due to repeated sticky school trips to the British Museum or a well-thumbed copy of Terry Deary’s kid-history classic the Awesome Egyptians, from a young age the magic of the Pharaoh, and the story of its discovery, begins to wear thin.

But this isn’t the case in modern Egypt. As revolution has shaken Cairo’s foundations, graffiti of the iconic resplendent face of the boy king, and other images of pharaohs – sometimes given a soldier’s beret or a Guy Fawkes mask – have been plastered across Tahrir Square and beyond. It is modern Egyptians’ “sense of ownership” of their country’s ancient past that the co-curator of the Ashmolean’s Discovering Tutankhamun exhibition, Paul Collins, finds so fascinating.

After wandering through the exhibition and being treated to six modern-day flappers Lindy Hopping to the 1923 hit Old King Tut, written in response to the tomb’s discovery (Old King Tut was a wise old nut/He got into his royal bed three thousand years BC and left a call for 12 o’ clock in 1923), I ask Collins about the resonance of Tutankhamun’s story today.

“I think it is a symbol of nationalist success that the imperialist occupiers couldn’t take the objects out of Egypt. They decided its fate,” he says. “That notion [of ownership] surfaces in the time of revolution. In this recent revolution, you have the amalgam of Islamic identity, modern identity and the relationship with the west, and the ancient identity. That’s what you see in the graffiti.”

Collins’ perspective is compelling, and even more so considering Discovering Tutankhamun – for all its colourful and detailed story-telling – doesn’t really touch on how Egypt was affected by the discovery, a turning-point made even more poignant by happening the same year as the country’s independence from Britain.

The exhibition is rich in detail, mainly due to the curators Collins and Liam McNamara ploughing for years through archives, displaying a whole host of material that has never been public before, mainly from the Ashmolean’s neighbour, the University of Oxford’s Griffith Institute, which is celebrating its 75th anniversary this year. It consists of archaeologist Howard Carter’s hand-written diaries, meticulous sketches recording every object in the tomb, fan letters following the discovery with advice on how to ward off the pharaoh’s curse, and negatives of photographs taken during the dig.

The first part of the exhibition tracks the relationship of the two men who discovered the tomb – Howard Carter and Lord Carnarvon ­– and how they came to work together in Egypt. There is a handy wall map marking the journey to Cairo from the Carnarvon seat, and current Downton Abbey location, Highclere Castle.

Carter was an artist down on his luck who had started out painting Egypt’s ancient tombs, and Carnarvon was an adventurous and academic aristocrat who had been advised by his doctor to move to warmer climes because of his bronchitis. The year following Tutanhkamun’s discovery, he grew weak and died died of pneumonia, leading to press hysteria about the “Mummy’s curse”.

Together, they led excavations of ancient tombs, and in 1914 were granted a concession by the Egyptian government to dig in the Valley of the Kings. Years of futile searching followed until the two men, low on funds, were ready to give up. They risked one last excavation in 1922, and the young pharaoh – whose reign, cut short when he died at 19, would have been insignificant in his time – obliged by storming into the world of the living. 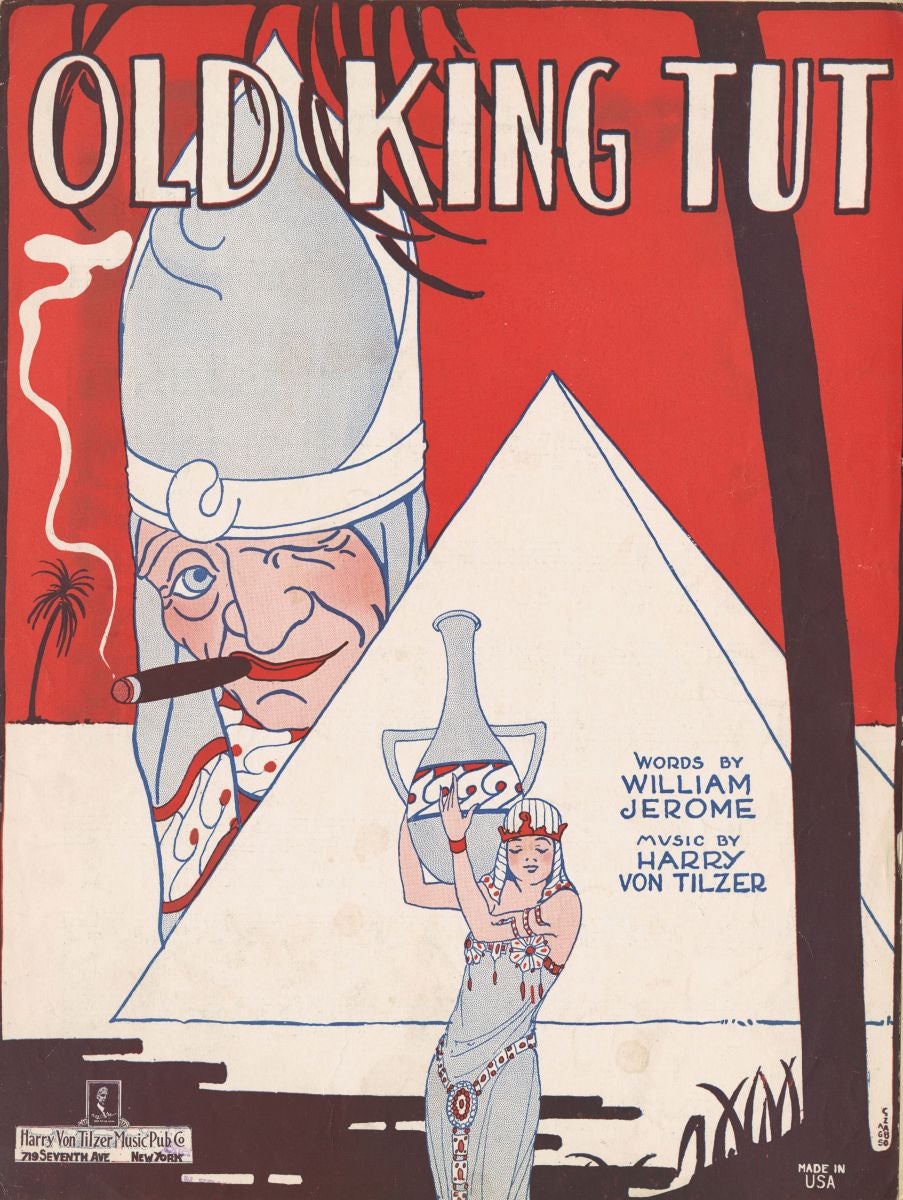 Discovering Tutankhamun does a thorough job of presenting how the discovery affected the world. The exhibition refers to “Tutmania” to describe the flurry of influence the tomb’s wonders had on design, fashion, jewellery and culture.

Among Art Deco designs spun with gold and hieroglyph patterns, Old King Tut sheet music, newspaper front pages, exhibition posters and London Underground advertisements (“Yes, it is odd living in the tomb of Tutankhamun… but we thought the agent said a room in Tooting Common…”), is the controversial tale of how the world heard the news.

Carnarvon sold the exclusive to the Times for £5000, a practice that was almost unheard-of in those days. It riled other journalists, and made the Egyptian press and public feel shut-out from their own story. This nugget is a hint at Egyptians’ reaction to the way the discovery was handled and how they were denied access to their own history by their occupiers.

Tutankhamun reared his golden head when nationalist roots in Egypt felt most precious and precarious. Not only was it the year of Egypt’s independence, but it closely followed a time when the Middle East’s borders were crudely carved up with a pencil and ruler. This is what makes a retelling of the excavation resonate today, when the Egyptians are again trying to define and cling to their national identity. In light of this, the Ashmolean should have explored Egypt’s role and told its visitors a whole other story of the tomb’s discovery.

Discovering Tutankhamun is on at the Ashmolean, Oxford, until 2 November