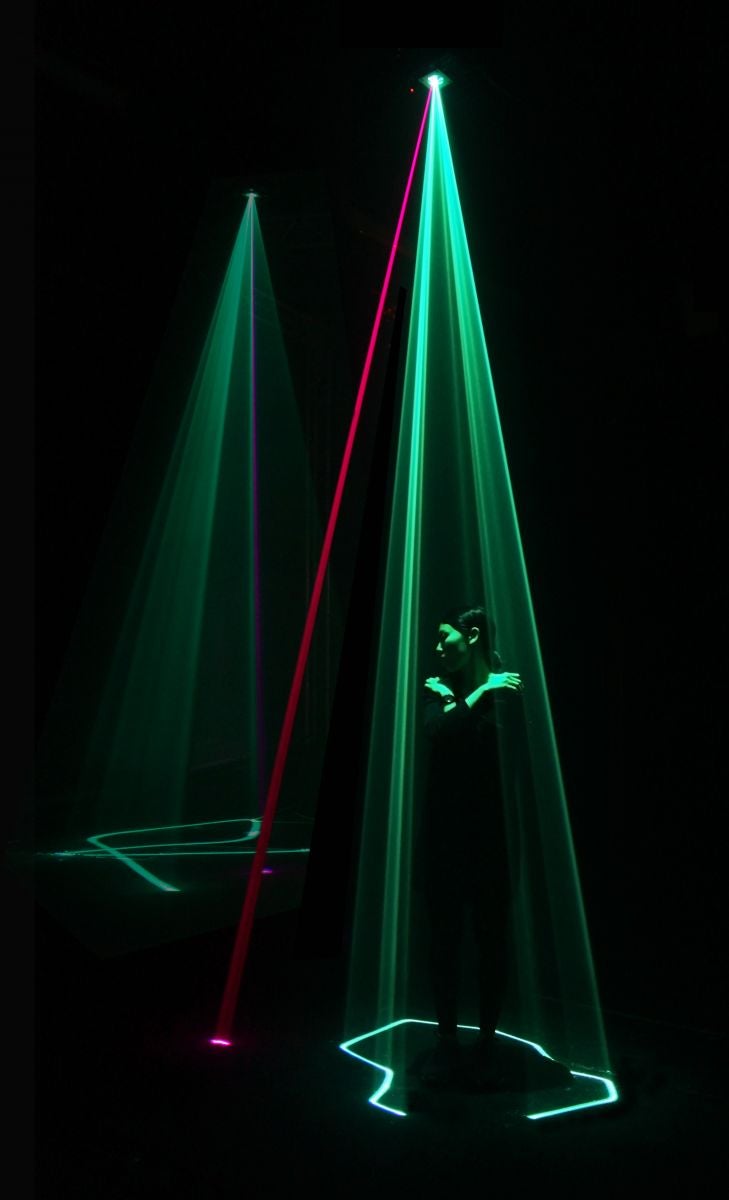 Umbrellium at the Barbican.

At the Liverpool Biennial this month, I had an epiphany: the video installation is the last refuge of the scoundrel. In a world where almost everyone I know carries a video recorder around in their pocket – and where Google is trying to get us to wear them on our faces – the mere act of committing something to tape is no longer alienating enough to kick the mundane into that strange sphere we call “art”. In 1972, when Ana Mendieta made Untitled (Death of a Chicken), an art gallery was probably the only place you could see a naked woman, splattered in blood, holding some recently deceased poultry. Now we have Reddit.

At the biennial – alongside several great exhibitions, including a well-curated selection of Whistlers at the Bluecoat – there were some spectacularly dull video installations. One was even canny enough to make a feature of its dullness by asserting: “Uri Aran plays with the way endless repetition can strip the banal of its meaning.” Oh, does he now? I resent artists who make me feel like this – like I’m some great big square who doesn’t get the ineffable postmodern profundity of resting a box of raisins over a vitrine filled with snot and would probably just prefer an insipid watercolour of a bee.

Nonetheless, I maintain that the feeling of “Yeah, but I could have done that” is lethal to the enjoyment of modern and conceptual art – and without the obvious artistry evidenced by mastery of a skill such as painting, sculpture or ceramics, it is easily evoked. Artists, take note: you can’t just film an orange for seven minutes and pretend it’s a meditation on solitude.

A small cheer, then, for the Barbican’s new exhibition “Digital Revolution”, which is devoted to the effect that technology has had on art and design. There is a video installation here that is enough to make anyone a convert to the medium: Chris Milk’s The Treachery of Sanctuary (pictured below). It features a triptych of video screens in a dark room, mirrored in a pool of water, which project your silhouette on to a white background. You see yourself stomp, fidget and gesticulate.

In the first screen, your silhouette disintegrates into birds and flies away; in the second, the birds peck you to nothingness. The final screen allows you to become a bird: fling open your arms and your silhouette suddenly has gigantic eagle’s wings, unfurling with a satisfying “whoomph”. The artist’s notes reference religious fervour, self-doubt and the cave paintings of Lascaux but even without any of that knowledge, the experience is memorable. It is art of this precise moment in history. First, it uses Kinect – the motion-sensing hardware developed by Microsoft that lets you pretend to ten-pin bowl or jet-ski from the comfort of your front room. Second, it uses that technology to answer a need created by another: specifically, that CGI moment in a science-fiction film when an ordinary human being suddenly sprouts wings (the X-Men movies do this well, as does Kevin Smith’s Dogma). Watching those films, surely every viewer wants to know what that might feel like? It turns out that even a small approximation is immensely satisfying. Every adult who stood in front of Milk’s triptych looked as wonderstruck as a child. 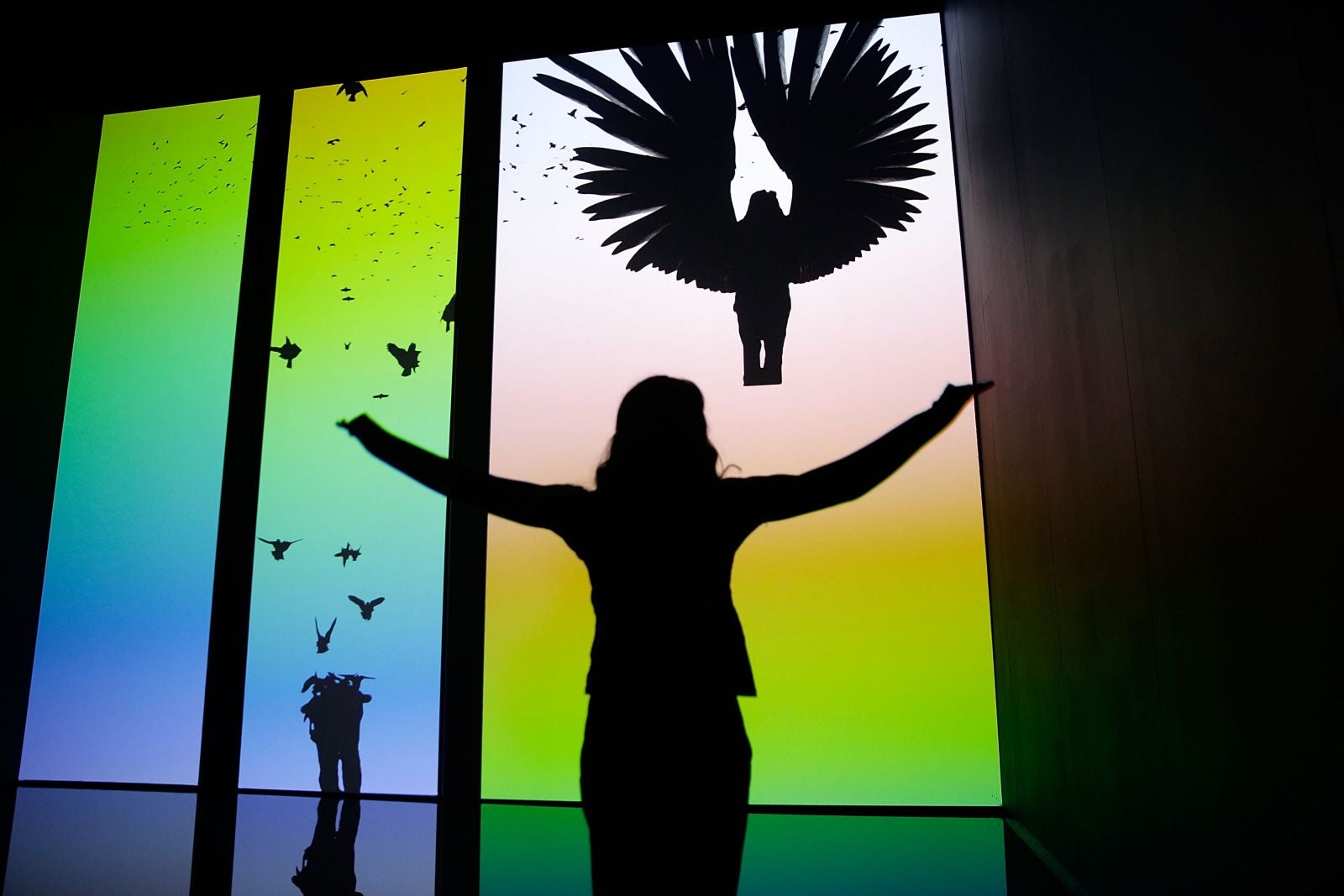 The other huge opportunity that the advance of the digital realm offers to artists is the possibility of crowd-sourcing. Elsewhere in the show, Milk has collaborated with another artist, Aaron Koblin, on The Johnny Cash Project, which offers people around the world a chance to redraw a frame of their choice from the video for the song “Ain’t No Grave”. Some are faithful replicas, others wild interpretations in a pointillist or impressionist style. The finished video, updated regularly on YouTube, is both recognisable and eerily estranged from its source material. Again, this is a work that speaks to a specific cultural moment. Technology has created the shared reference, through the mass-media power of the music video, and supplied the means to mimic it, through Photoshop and other software.

The reason I got this reviewing gig is that the exhibition also features games. There are early classics, which show how the commercial power of titles such as Pong, Pac-Man and Super Mario Bros drove innovations in hardware, alongside examples of later experimental and indie games.

A breathless pause here to deal with Roger Ebert’s question, which has haunted the medium for the past decade: can a video game be art? The answer, on this evidence, is yes. Ebert, a film critic, suggested that the interactive element of games showed there was no guiding creative intent: “I believe art is created by an artist. If you change it, you become the artist. Would Romeo and Juliet have been better with a different ending? . . . If you can go through ‘every emotional journey available’, doesn’t that devalue each and every one of them?”

But what many of the best games do is show their workings – they uncover the straitjacket of context within which your choices are made. My favourite title, BioShock (not on show here), is a good example, because of its unreliable narrator. The Barbican gives you a chance to play last year’s bleak indie hit Papers, Please, which forces you to act as an immigration official in a crushingly monotonous Soviet bureaucracy. Every choice leads to misery; there is no way to “win”. 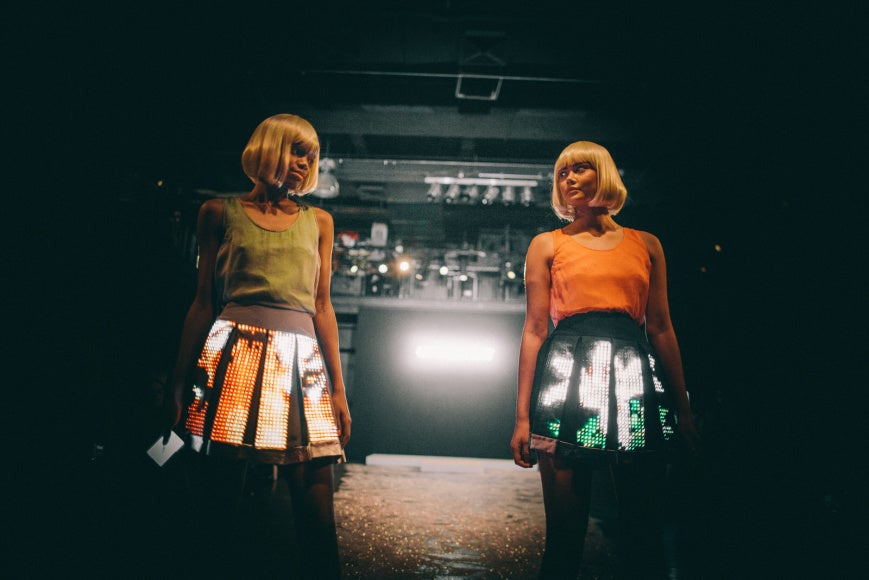 The problem with Ebert’s question was that it prompted a retrenchment. As a journalist born in the 1940s and a representative of the more established medium of film, he unwittingly pushed the button in every gamer marked: “But grown-ups don’t understand me!” And so, for several years, games manufacturers decided the best way to gain the approval of the cultural gatekeepers was to mimic cinema. The 2000s became the decade of the interminable cut scene, in which you were forced to watch mediocre mo-capped actors plank their way through utter bibble about lost home worlds and tactical assault teams before you got to the good bits (that is, shooting people in the face).

Finally, though, games are shrugging off their inferiority complex and the irony is that only now is their artistic potential being realised. While it’s true that the mega-hits – the soldier-simulations and dystopian rampage fantasies – are often immensely dumb and cliché-ridden, the same could be said of Hollywood blockbusters. At least in the game world, indie titles have an easy route to consumers, through the Steam software for PC and Mac and the Xbox and PlayStation marketplaces.

Avant-garde games have gone in two distinct directions, both driven by the urge to get away from the desire to “win” or “lose” and a desire to be more self-consciously “artistic”. Some, such as Dear Esther, Dys4ia or Gone Home, try to tell small-scale stories through a game mechanic focused on discovery; they are perhaps better described as “interactive fiction”. Others, such as Journey, Flower or Proteus, do away with any measure of progress and concentrate instead on creating a pure sensory experience.

What this exhibition delivers is a feeling of abundance, of creativity, of the potential of this palette of tools to turb0charge the human imagination. There’s more, too: a sense of connection unimaginable even 30 years ago. Inside the online game Minecraft, there are vast cities built by the mouse clicks of thousands. The indie title Fez has puzzles that are so difficult they can only be solved by an online horde comparing notes on a forum. But underneath it all, there is fragility. The Barbican’s first section, “Digital Archaeology”, reminds you that what is cheap to create is also easily discarded. In 2012, New York’s Museum of Modern Art started collecting the source code of old games, reasoning they could easily be lost for ever as the consoles needed to play them broke down or were thrown out as rubbish.

There’s the rub of artistic expression in our digital world: we can send data across the world at a keystroke, but in 100 years’ time, the highest achievements of our culture might be inaccessible to us, locked away in a digital space to which we no longer have the key. Mind you, when it comes to video installations of solitary oranges, I’m not sure that’s any great loss.

“Digital Revolution” is at the Barbican Centre, London EC2, until 14 September