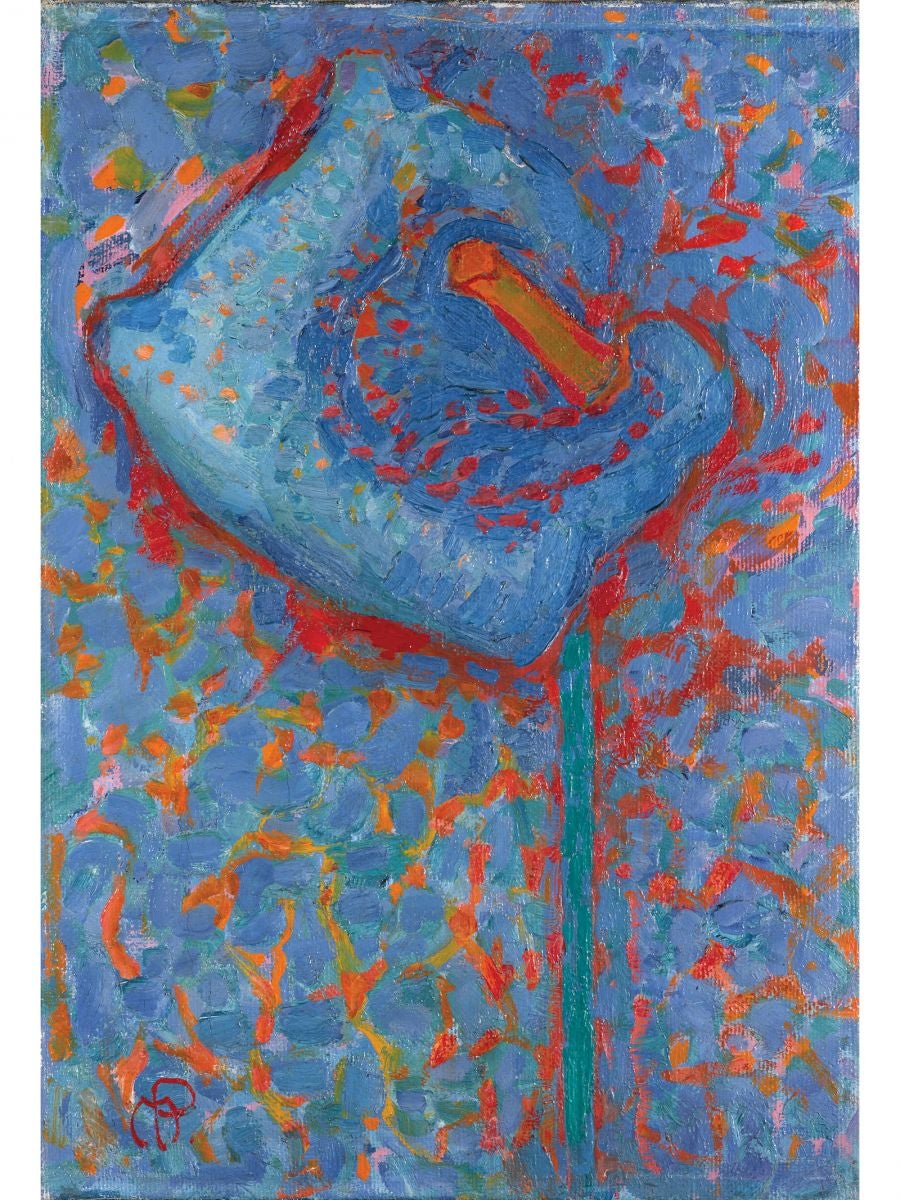 The latest exhibition at the Turner Contemporary gallery in Margate has one of those statement titles so favoured by curators, “Mondrian and Colour”, but it would perhaps be better called “How He Got That Way”. Before Piet Mondrian became the cerebral international artist of black grids and rectilinear blocks of colour he was an unremarkable Dutch landscapist. This exhibition of roughly 50 paintings lays out the magpie path that took him from stolid burgher to ascetic modernist and his paintings from depicting farmyards and stands of trees by the Amstel and Gein rivers to pure geometrical abstracts.

The show works retrospectively. It is the knowledge of what he was to become that makes the bulk of these often workaday pictures interesting. In Farmhouse with Wash on the Line (circa 1897), for example, it is only hindsight that allows the terracotta reds and slate blues of the roofs or the white of the drying linen to be seen as precursors of the reds, whites and blues of the “lozenge” paintings of the 1920s, in which each colour was isolated, reduced to a primary shade and freed from representational duties. The pictures here are containers of clues or markers, ticking off a remarkable transformation along the way.

It was, though, a transition that took a long time: the exhibition covers a period of nearly 25 years, during which he drew on a bewildering number of other artists’ works as he tried to find a style of his own. Especially before 1911, when Mondrian moved to Paris, his paintings are a checklist of contemporary movements. There are touches of the rural naturalism of Jules Bastien-Lepage and of Gauguin and the Pont-Aven school; his trees suggest Corot; there is both the fraught symbolism of Munch and the colour dashes of the Fauves. All these influences were grafted on to a discrete set of motifs: churches, windmills, rivers, dunes, copses. There’s a bit of everyone in there except for Mondrian. Changing his name from Mondriaan to Mondrian was an admission that he was not yet who or what he wanted to be.

His journey towards abstraction accelerated after 1908 when he became interested in theosophy and, in particular, colour theory. He came to believe that painting could simultaneously embody nature and spirituality. After reading Goethe’s Theory of Colours he saw this union as best captured in blue (representing darkness) and yellow (representing light), with red intensifying each colour. “To approach the spiritual in art,” he wrote, “one will make as little use as possible of reality, because reality is opposed to the spiritual.”

As a result he began to pare down his paintings, reducing panoramas to broad sweeps of sky, water and land and minimising detail. As he noted: “The emotion of beauty is always obscured by the appearance of the object.” He also started to keep direct sunlight out of the landscapes, preferring the charged atmospherics of twilight, when the temporal and the spiritual start to blend.

Initially Mondrian’s experiments are gentle affairs and their effect is muted. It is not so much heightened emotion that predominates as a watercolour genteelness. It is when he starts to be properly bold that the pictures become interesting in their own right. His paintings of a Zeeland church tower of 1909-10 and 1911 and The Red Mill (1911) have great power and a palpable sense of objects reaching upwards, straining from the earthbound towards the transcendent. The Red Mill in particular, painted only in shades of blue and red, has a Rothko-like throb to it. The mill with its sails may be recognisable but it has become a totem rather than an agricultural building.

It was when Mondrian encountered cubism that he finally saw the way to break with representation altogether. Unlike Braque and Picasso, however, he was interested not in showing the third dimension but in using “lines and colour combinations on a flat surface, in order to express general beauty with the utmost awareness”. The black outlines of cubism’s fractured planes became a way for him to organise his universal colour harmonies. Although he was stuck in Holland during the war, he returned to Paris in 1919 and pressed on with his geometrical abstractions and by 1920-21 he was, at last, painting recognisable Mondrians.

It is at this point in his career that the Margate show stops and Tate Liverpool takes over with “Mondrian and His Studios”. This exhibition shows how, having found a style, he set out not just to paint in it but to live it, turning his studio at 26 rue du Départ into a giant artwork – architecture as a painting for living rather than Le Corbusier’s “machine for living”.

By the early 1920s both his life and his art seem such a logical and coherent response to the immediate postwar world that it is easy to forget how he arrived there. Is there any other painter whose style changed so much?

“Mondrian and His Studios” opens at Tate Liverpool on 6 June and runs until 5 October (tate.org.uk)