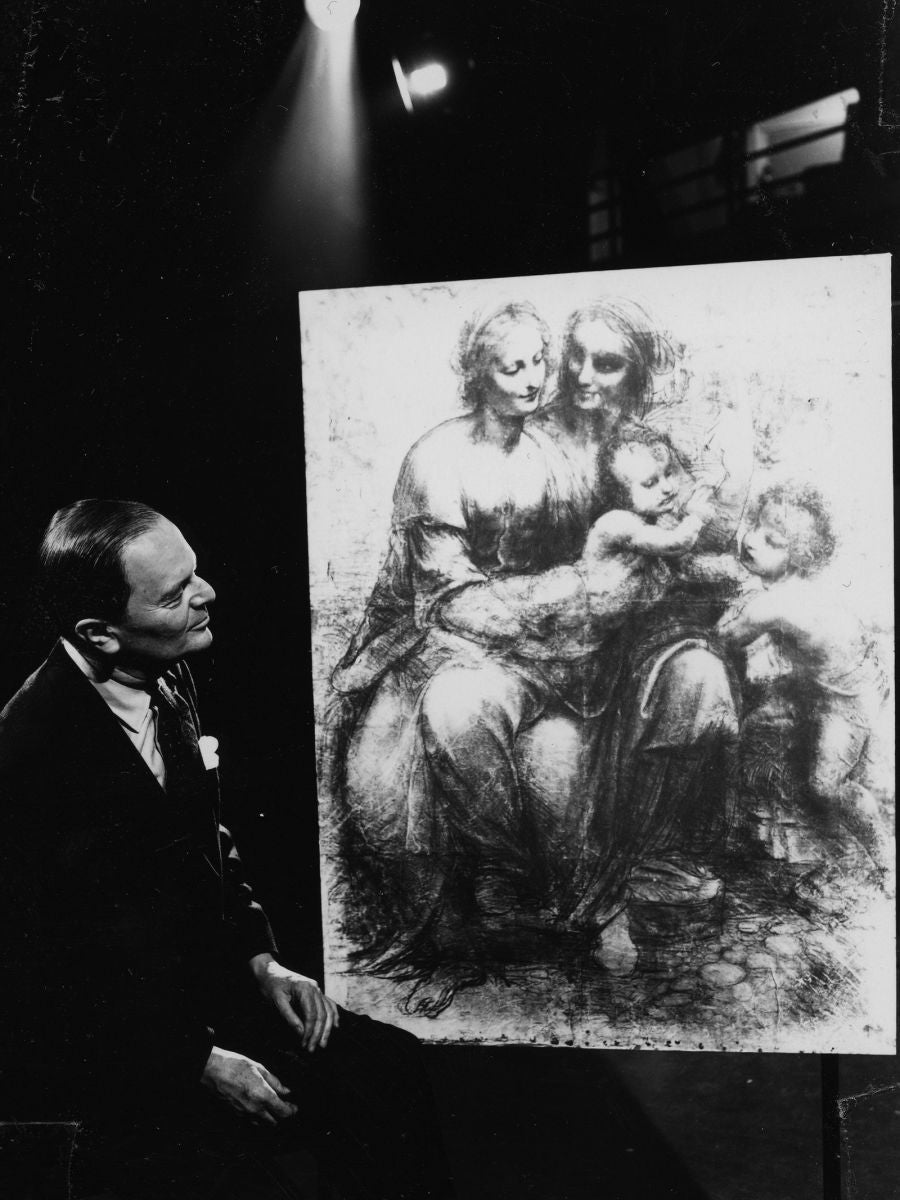 Hello, culture: Kenneth Clark with Leonardo da Vinci’s The Virgin and Child with St Anne and John the Baptist in 1962

Kenneth Clark, the art historian and creator of the BBC’s landmark documentary Civilisation, was a contradictory and divisive character. There were many – notably the poet and champion of the avant-garde Herbert Read – who would recognise the extent of his influence but lament it. Yet he was arguably the most influential tastemaker in 20th-century British art, which explains Tate’s decision to hold “Kenneth Clark: Looking for Civilisation”, our first major exhibition focusing on a single figure who is not an artist, setting the work of those he promoted (among them Henry Moore, Graham Sutherland and John Piper) alongside some of the art he studied and collected.

When Clark became the director of the National Gallery in 1933, at just 30, his reputation as an Italian Renaissance expert was established (and soon bolstered by his 1935 catalogue of the Royal Collection’s Leonardo drawings). His subsequent monograph on Leonardo remains a key text, as do his well-known and expansive studies Landscape into Art and The Nude. Between the wars he gathered an eclectic collection of fine and decorative arts, encompassing paintings, drawings, sculptures, ceramics and medals of the Renaissance and works by late-19th-century artists such as Seurat, Degas and Renoir. Never a systematic collector but one who opportunistically acquired things he loved, Clark was buying at a time when it was still possible to pop into Paul Guillaume’s gallery in Paris and select about 50 exquisite works from a portfolio of Cézanne drawings deposited by the artist’s son.

Something of the range of his collecting can be seen in two albums he acquired: one a collection of medieval illuminated initials, the other of 18th-century English pub sign designs. It was Japanese painting and woodblock prints that first stirred his aesthetic sensibility and a series on Japanese art is among the many discoveries that the curator John Wyver made while investigating the 40 or more programmes Clark presented for the independent television company ATV, years before the BBC’s Civilisation took his fame to a new level.

At the Tate exhibition, masterpieces of modern British art are bookended by Clark’s  eclectic collection and samples of his television work. There was scepticism about such a project – surely Clark was either forgotten entirely or remembered as a stuffy patrician figure of a bygone age? Wasn’t his highbrow attitude lampooned by Private Eye and Monty Python’s Flying Circus?

It is gratifying to find him once again at the centre of public conversations about culture and television. The BBC’s director general, Tony Hall, has promised a new version of Civilisation, sparking a debate over who is likely to fill Clark’s shoes. But the show, which aired in 1969, was for Clark the culmination of a lifetime’s work promoting public access to art and culture: he shaped the way we think about the art museum and the relationship between art, the public and the state.

As the director of the National Gallery, he introduced electric light to enable the space to stay open after dusk – and opened on Cup Final day. During the war, when the collection was evacuated to slate mines in Snowdonia, the gallery was reinvigorated by exhibitions of war art, a series of “picture of the month” displays and celebrated lunchtime concerts. In 1943, Vogue magazine could report that, thanks to its director, the National was “now the true centre of the country’s culture . . . Tradition and innovation go side by side, harmonious and vital.”

During this time, Clark made his name through the state-sponsored war artists scheme, which helped to keep artists active, and he took art to a wider audience through touring exhibitions, commissions in public places and affordable publications. Behind the scenes he campaigned to ensure that public subsidy would continue after the war. While he praised the commissions of such bodies as London Underground and Shell-Mex, he believed that the limits of corporate interests would always prevent business from fully supporting Britain’s cultural life. He believed that government support of the arts was essential if Britain’s culture was to remain vibrant and innovative; art was too important to the life of the nation to be left to the market alone.

He was a natural choice for chairman of the Arts Council in 1955. Behind the infamous tweed suits and grand manner, Clark was a pioneering advocate of the value of art to the people and of the vital importance of its dissemination to as diverse an audience as possible. His spirit lives on in our national museums today.

“Kenneth Clark: Looking for Civilisation” is at Tate Britain, London SW1, until 10 August