Most weekday mornings I get up and make pancakes for the two of my children who still live at home. I can cook a passable Irish stew or lasagne – I’ve been known to attempt a ribollita or caldo verde (the peasant soup is a particular love of mine, of which more later) – but most parties agree that I excel at pancakes. I’m not talking about the big thin pancakes the English sprinkle sugar on and douse with lemon juice – these, the floppy wafers of the Anglican Communion, are quite alien to me. No, the pancakes I make are American ones: about five inches in diameter, nicely browned, and almost fluffy in consistency. These are served with either maple syrup or strawberry jam, and accompanied by grilled bacon.

When I was a child and friends came to our house and were served with pancakes by my American mother, they’d wrinkle up their little noses and say, “Ooh, drop scones” or, “Aren’t those Scots pancakes?” Either response infuriated me, and “The Battle Hymn of the Republic” would swell in my inner ear as I rounded on them: “These are American pancakes!” Now, of course, such is the mid-Atlantic character of our cuisine that you can feast on a stack of the things in your local chain café, but it remains the case that if I make any oath of allegiance at all it’s to the American pancake, not the president. Shortly before my mother died I got her to pass the recipe on, and while she never lived to see her grandchildren, I like to think of her as being constantly reincarnated for them in the form of these tasty discs.

The recipe is perfectly simple: self-raising flour, eggs, milk, water, sugar, salt, melted butter. I’ve no idea about precise quantities – having long since learned to mix the batter by eye – but my cooking really has nothing ad hoc about it. Each stage of the process is perfectly integrated with the morning routine: while the butter is melting in the frying pan I pour the flour into the mixing bowl; once the first batch is cooking I take the time before turning them to clear the plate dryer, or set the table; as I add to finished pancakes heating in the oven, so I perform other necessary tasks; and when the boys begin eating I start on the washing-up – my aim is to be seamless, so that the whole business is done with shortly after they finish eating. 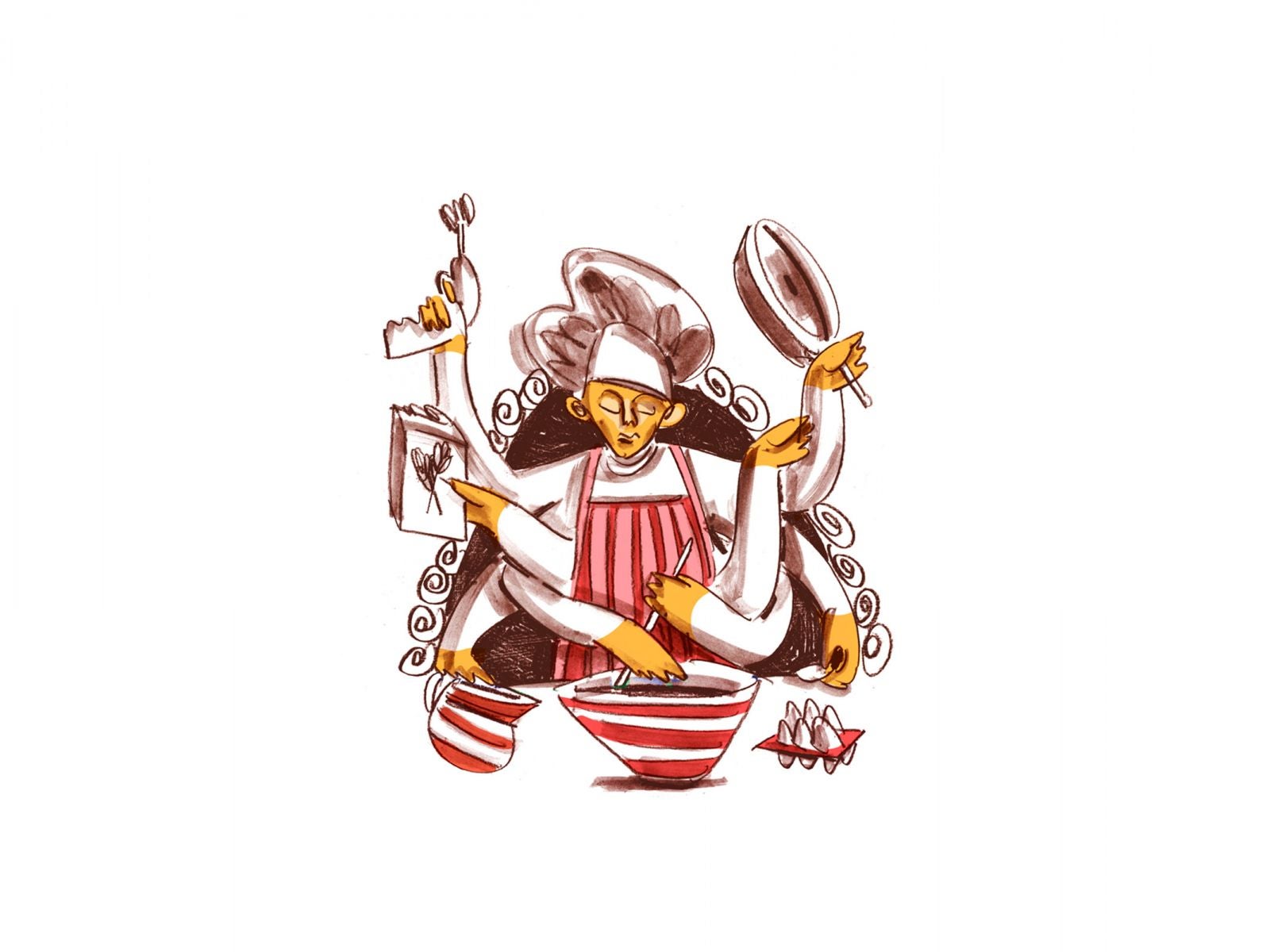 I suspect my love of pancake breakfast has as much to do with this production line as it does with any desire to nurture my offspring, or culinary atavism: making pancakes in the morning makes me feel like part of the common weal, just another spatula-wielder trying to add to the great mound of steaming growth necessary to fuel our resurgent economy.

Indeed, such is my enthusiasm for this cod-utility that I usually make too many of the damn things. “You’ve beaten me,” one or other of the boys will often groan, looking despairingly at the pile still in front of him while clutching his bulging tummy. “Are you sure?” I’ll chivvy him, looking manically from pan to mouth and wondering whether I can shoot another batter-puck in there while he’s distracted.

My mother wasn’t exactly a versatile cook, but she tried hard. She also battled with her weight for the last 20-odd (very odd) years of her life. I remember her standing in front of the mirror in a slip when I was a small child and chanting in a despairing mantra: “Fat and old, fat and old . . .”; sometimes I wonder if that’s what I’m trying to do to her grandchildren: pump them so full of pancakes that they, too, will be fat and old. She also had a somewhat conflicted relationship with her ethnicity, believing – on no basis whatsoever as far as I could see – that no one really knew she was Jewish. Even if this was the case, she was forever blowing her cover by cooking up steamy heaps of faecal-
seeming chopped liver, or frying potato latkes, or boiling enormous vats of – yes, you guessed it – chicken soup.

Mother tended towards stereotypy in her belief that most of the world’s ills could be cured by a bowl or three of chicken soup. She made a great chicken soup: the broth clear but oily, while floating in this were bits of carrot, celery and fowl, as down below a shingle of pearl barley shifted. When she began dying I looked at her incredulously: surely anyone who’d supped such a catholicon for a lifetime couldn’t actually expire? But expire she did, and before I’d got her recipe off her. Really it would be a lot better if I could feed the whelps chicken soup – all of that flour is propelling them speedily on their way to fashionable wheat intolerance, and as for the sugar and salt, it’s shameful. But given that I have just the one hand-me-down recipe, I keep on following it, as if it were a culinary transcriptase that had to be written into the next generation.

Last Shrove Tuesday the boys’ older sister asked me for the recipe and I relayed it over the phone to her while she mixed the batter in her student flat. I asked her later if the pancakes had gone down well and she said they had, but her friends said they weren’t proper pancakes – only drop scones.

I’m whisking in my grave – and I’m not even dead yet.