Glyndebourne’s season opened last week with a tragedy and a comedy, but overpowering both was a scandal. When the “big five” broadsheet music critics voted as one to christen Tara Erraught’s Octavian in the company’s new Der Rosenkavalier “dumpy”,  “unsightly and unappealing”, and “a chubby bundle of puppy-fat” it touched a national nerve that still continues to twinge with opinion pieces and radio interviews.

The question of physical appearance in opera in an old wound that flares up periodically. Must singers be held to the same standards as actors, or should appearance be irrelevant as long as the voice is good enough? Are we favouring model-like Mimìs while indulging portly or elderly Rodolfos? Good questions all, but ones with little place in a review. I pay Erraught and her cast-mates the compliment of discussing the production as the thoroughly entertaining and impeccably executed art that it was, rather than getting bogged down in soap-boxing or sermonising. Anyone hoping for invective should consult the Guardian (whose own critic was a prime-mover in all of this) instead.

Richard Jones was always going to be a bold choice to direct Rosenkavalier in Strauss’s anniversary year. Witty and provocative, his productions don’t always offer quite the veneration to the original work that devotees desire. Everything in Jones-land is brighter and bigger – thought-provoking, certainly, but also thoughtful.

Here, aided by Paul Steinerg’s designs, Jones creates a Rosenkavalier that’s polished up so brightly that we can see our very twenty-first century faces reflected back at us in its glinting surface. There’s a certain elegance to a production that sees the young Sophie (sold in status-enhancing marriage to the ghastly Baron Ochs) paraded up and down a boardroom table like livestock at an auction provoking the same kind of dispassionate physical scrutiny by critics. We live in an age of glittering surfaces, and Strauss’s Vienna is no different.

Signature Jones wallpaper covers the sets from floor to ceiling like the pastel-coloured interior of a box of Viennese truffles. His characters’ psychodramas – real and vivid – chafe fruitfully against this belittling confinement, before being liberated into the glorious pomposity of the Faninals’ home – reimagined here, deliciously, as an Art Deco hotel.

Much of the impish delight of Jones’s production stems from his casting. Too often we see Marschallins well past their prime. Here, as Hofmannsthal intended, she is young and beautiful. Kate Royal makes a fine role debut; vocally this isn’t the largest or the most generous heroine, but for clarity and energy it’s a winner, sparking and sparring with Erraught’s Octavian in a way that’s both playful and deeply affectionate.

Erraught brings full-toned directness and real character to her role, channelling a youth that makes for a particularly innocent and touching courtship with Teodora Gheorghiu’s jewel-box ballerina of a Sophie. But though dramatically effective, Gheorghiu as yet lacks the vocal control (especially at the top of the voice) for the role, and with Royal’s lighter Marschallin this makes for some less-than-grounded ensembles. The final trio is moving, certainly, but not musically quite as exquisite as it could be, tending slightly shrill.

They aren’t helped by Ticciati’s pit, who produce lovely sounds but far too little of them. A good Rosenkavalier should float, supported by its billowy orchestra, but here the singers are left to fend for themselves too often.

At risk of spoiling the trick for those yet to see it, I will say only that Jones has plenty of other innovations and reimaginings up his sleeve. The final stage direction concerning the Marschallin’s forgotten clothing has rarely felt so natural a conclusion. 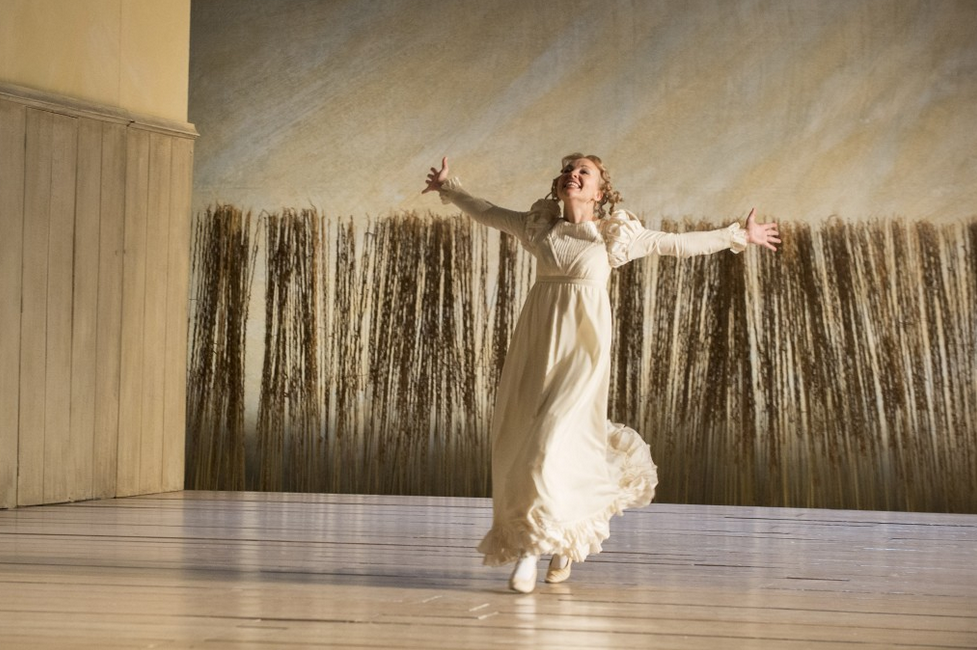 From acid social satire to romance in Tchaikovsky’s Eugene Onegin. Graham Vick’s Glyndebourne production celebrates its twentieth birthday this year by returning in the hands of the original director himself. Much of the gilt-and-velvet excess of Pushkin’s Russia is stripped away here, leaving just its essence in the ballrooms and drawing rooms of St Petersburg. There’s a Baltic cleanness to Richard Hudson’s sets for the rural scenes that balances this, giving us wide emptiness and grandeur where we more often get busy domestic scenes and colourful peasantry.

The effect is to focus us more directly on the characters, rather than losing them in the bustle of atmospheric action. Ekaterina Scherbachenko’s Tatyana is more contained than most, an introverted teenager with a vivid inner life. She is paired with a slightly-too-manic Olga (Ekaterina Sergeeva) in an opposition that feels more extreme than usual. The women lead the cast, from Scherbachenko’s ecstatic letter scene to Irina Tchistjakova’s earthily resonant Filipyevna.

The men are more problematic. Though solidly sung, Andrei Bondarenko’s Onegin never really catches fire. Physically stilted and ill at ease in his movements, he makes a plausible enough judge in the early scenes, but not a sufficiently passionate lover in the latter. Edgaras Montvidas feels miscast as Lensky. This Lithuanian tenor is no more capable of forgetting he is a star than of singing badly, and the result is a Lensky who lacks anything of innocence or sweetness, but gains a rather unexpectedly glossy assurance.

Moving from the naturalism of the countryside to the grotesque exaggerations of the closing scenes, Vick’s drama has a natural crescendo to it that heightens Tchaikovsky’s tale excitingly. It would help if lengthy scene-changes didn’t threaten continuity of emotion and if the director had perhaps moderated his fondness for curtains, but quibbles aside this is still a fine production and one that wears its age lightly.