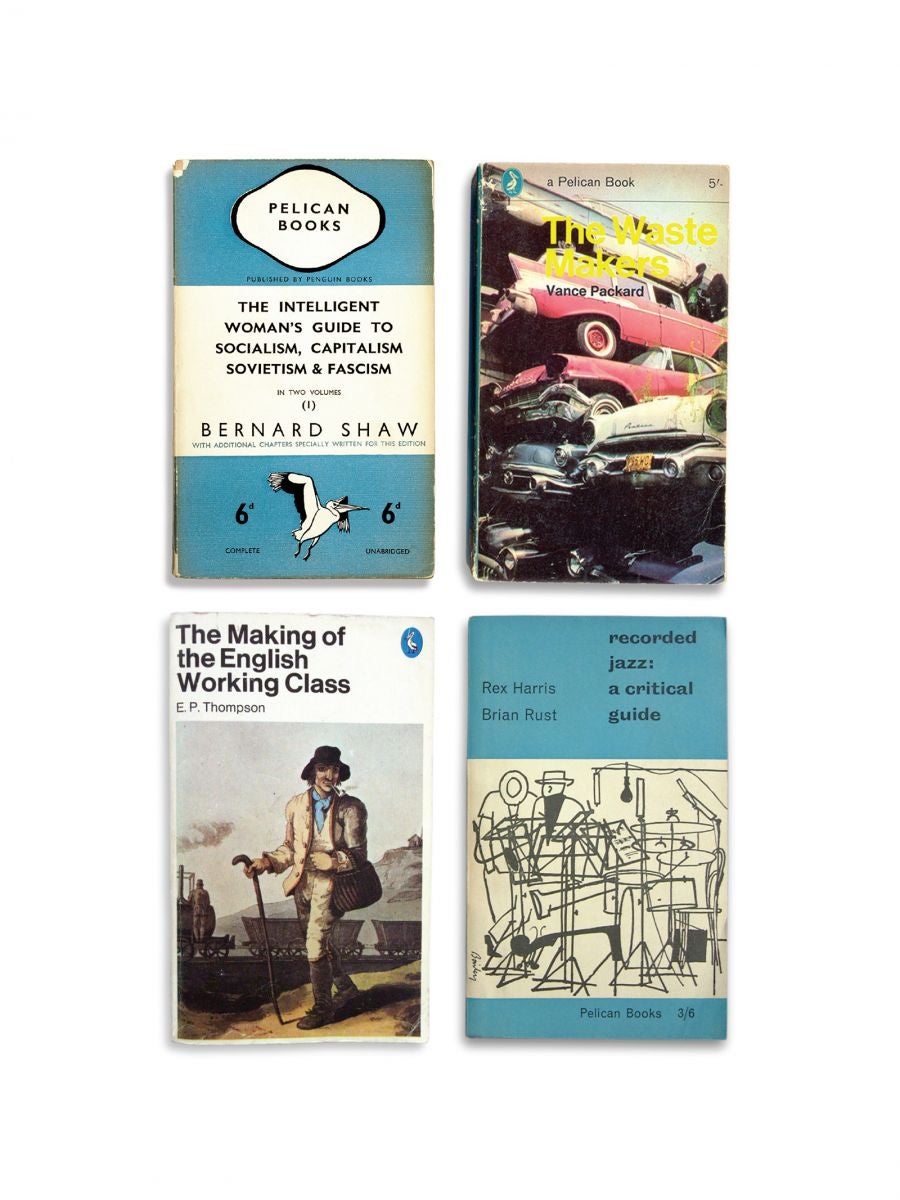 A wonderful book is the Pelican: editions through the decades, from Shaw’s 1937 political tract onwards

The Pelican book rises from the ashes this month. Why, one wonders, exhume a series that honourably ran its near-50-year course, fading out in the 1980s? One reason suggests itself – agglomeration. Penguin wants to assert and define a “core” identity: where, so to speak, it is coming from.

The decision to revive Pelican will have been made by committee. At its birth in 1935, Penguin Books was the brainchild of one man. The 1930s were a decade of dictators and Allen Lane was the Mussolini of the book trade. Biographies of “King Penguin” paint the picture of someone who was not over-cultivated, often uncouth, frequently overbearing but passionate about good books. He had no university background and did not belong to the best London clubs. If publishing was a trade for gentlemen, many would have felt that Allen Lane did not qualify.

Penguins began as sixpenny paperbacks with hardback content. Lane launched the non-fiction Pelicans in 1937, as budget reprints and “Originals”. They expired 47 years later. The reasons are obvious enough. The 1960s were the decade of the “paperback revolution”. Lane loathed illustrated covers, associating them with American drugstore tat. For him, Tschichold typography was all that was required. Nor did Lane like large format. He had conceived of Penguin Books while standing on a windy platform at Exeter Station. His books were designed for the overcoat pocket (or the battledress pocket in wartime), not the bookshelf.

Lane yielded, with extraordinarily bad grace, on the pictorial cover issue in the mid-1960s, under pressure from his brilliant (and later disowned) protégé Tony Godwin. But Pelicans, even decked out in these new feathers, could not compete with the eye-catching “egghead paperbacks” (trade paperbacks), which had been innovated by Jason Epstein at Doubleday in the 1950s. They caught the eye – particularly the younger eye – and were quickly picked up by British publishers less traditional than Penguin. Pelicans looked dowdy by contrast and paid the price.

For most of today’s reading public, the word “Pelicans” has no cultural resonance. For those in my ancient demographic, however, they were formative. When I was growing up, paperbacks meant access to two things hard to come by in the postwar period: sex and knowledge. The first was delivered via Hank Janson, smuggled Olympia Press texts, Lady Chatterley’s Lover and Eustace Chesser’s much-thumbed and initially banned manual Love Without Fear.

Knowledge, in its most interesting varieties, came in pale blue covers. Everything I know about the Greeks came from H D F Kitto’s 1951 Pelican; everything I know about Leibniz (shamefully little) from Ruth Lydia Saw’s 1954 Pelican. I was mad about jazz as a teenager. The Pelican Jazz, by Rex Harris, put some intellectual stuffing into my madness.

Pelicans were a university without walls, teaching things that wouldn’t be on intramural courses for generations. They were hailed as the “popular educator” (with a nod back to Charles Knight’s Society for the Diffusion of Useful Knowledge). And they were also founded on frankly populist political principles. The first two-volume title in 1937 was a reprint of George Bernard Shaw’s Fabian-feminist tract The Intelligent Woman’s Guide to Socialism, Capitalism, Sovietism and Fascism, a book that was originally published in 1928 to coincide with women getting the vote. (“Unreviewable”, proclaimed the New Statesman, going on to give it two argumentative pages.) In 1968, as its 1,000th volume, Pelican published E P Thompson’s The Making of the English Working Class. A red (ish) flag fluttered over the whole list.

A student and disciple of Cyril Burt, Eysenck was an evangelist for the “intelligence quotient”, or IQ: the belief that “pure” brain power could be measured as something unaffected by social circumstance. His bestselling Pelican Original was called Know Your Own IQ (1962).

The IQ theory – however flawed, looking back, one now sees it to be – opened doors, through the eleven-plus examination, for working-class children (including me) into tertiary and higher education. Once we were in the grammar schools, Pelicans were our vade mecums. And grammar schools, for the majority excluded from Oxbridge – unable to admit more than what it saw as the cream – led (for me and for most women) to the non-Oxbridge penumbra.

The ideological soul of the Pelican library is, I believe, encapsulated in one volume: Bruce Truscot’s Red Brick University. His polemic was first published in the summer of 1943 when – after Stalingrad and El Alamein – victory looked a certain prospect and “when the future of modern universities was being widely discussed all over the country”. There was, thank God, a future to discuss. Truscot’s monograph was expanded, rethought and rewritten in 1945, on the eve of the great postwar welfare reforms. Red Brick University was again revised and published as a Pelican Original in 1951, as Attlee’s government staggered to the end of its time, having left the welfare state as its monument. In its Pelican form, Red Brick University circulated widely and influentially.

Truscot’s vision was of a postwar higher education system based on ideals of univer­salism (“a right, not a privilege”) and fairness. “Red brick” was never his preferred epithet. He called them “modern civic universities” (MCUs). At the time he was writing, the bulk of MCU undergraduates were locally enrolled and lived at home. As Truscot pictured it, “Bill Jones”, after dutiful study at the Drabtown red brick, went home “every day at teatime, to listen to Dad on the political situation and Mum on current market prices or the iniquities of neighbours”. High tea but no high table. And a row of Pelicans in Bill’s bedroom.

The MCUs belonged not to a “class” but to a place and a “region”. They had “roots”. And they were growing, as Truscot fondly believed, in strength. “Bruce Truscot” was as much a pseudonym as “Bill Jones”. The books were written by Edgar Allison Peers. He was, when writing his Red Brick series, professor of Hispanic studies at the University of Liverpool. His identity was kept secret until his death in 1952.

English society, as he bluntly put it, had been “half-strangled” by the Oxbridge hegemony and institutions that belonged to the “medieval past”. But no more. The dynamisms released by wartime victory and a reformist government would create a new and more democratic world of higher education. The future was Drabtown University’s Bill Jones, not William St John Toff of Eton and Balliol and Bullingdon.

The Truscotian avatar – had he lived to witness it – would have been Richard Hoggart. Born “copper-bottomed” working class in Leeds, in 1918, Hoggart went from the local grammar school to the local Leeds red brick. After service in the Second World War, he taught at Hull. He also worked, as an act of class solidarity, on a building site, reneging on the brevet-officer-class status he acquired during the war, then Leicester (where I was lucky enough to be taught by him) and Birmingham, where he founded the Centre for Contemporary Cultural Studies.

Encouraged by Ian Parsons, Hoggart pub­lished The Uses of Literacy as a hardback with Chatto & Windus in 1957. It then achieved mass circulation as a Pelican. (Allen Lane reportedly read the book at a sitting before setting the presses rolling.) It was in its pale blue livery that The Uses of Literacy was passed around among the advanced thinkers in my sixth form.

Hoggart’s book went on to become, in its successive Pelican reprints, a manifesto for the new provincialism and redefined culture from its narrow Arnoldian form into something universally enriching. His chapter on the deracinated grammar school boy echoes Truscot’s belief that an organic relationship with one’s background and traditions was what held society together, what made it truly social. Hoggart, who died last month, became one of the country’s leading public intellectuals without any contact with Oxbridge and, in many ways, in defiance of what Oxbridge was. And is. He was many things. One of them was Homo pelicanus.

This magazine, as readers will know, has recently opened what will be a long and profoundly serious debate on what one could call the “re-privileging” of British education: this is a country under the cultural dictatorship of the old public school/Oxbridge duopoly and, within that, all-powerful elites. In an interesting admission on Newsnight, Harry Mount – a Bullingdon Club contemporary of Osborne, Cameron and the two Johnsons – divulged that, between smashing glassware, the club discussed Vico’s theory of necessary elitism. It fits.

Pelicans, in their first manifestation, were not just books. They contained a vision of Britain as it might be – and as it should be. They changed their world. Good luck, then, to Pelican Redux and may it do the same.