Jeeves and Wooster in Perfect Nonsense
Duke of York’s Theatre

Sometimes it’s the smallest things that get the biggest laughs. When Robert Webb, who has just taken over as Bertie Wooster in the West End smash Perfect Nonsense, opens the second act by making a rubber duck shoot up out of his bathwater, twice, it’s impossible not to giggle. We might know him better as the sardonic, flippant Jez in Peep Show, but there is no trace of that here. His goofy grin is infectious.

Webb and his co-star Mark Heap have just taken over as Wooster and Jeeves from Stephen Mangan and Matthew Macfadyen, who originated the roles for this production last year. Perfect Nonsense, which recently won the Olivier award for best new comedy, is a dream show for comic actors seeking a wider audience (as both Webb and Heap must be, as they each try and build on cult TV hits Peep Show and Green Wing). Thanks to the enduring popularity of the source material – P G Wodehouse’s novel The Code of the Woosters has been adapted numerous times for radio and television – and the familiarity of the characters, the audience is well-disposed to this new incarnation from the moment the curtain rises on Webb in a red velvet smoking jacket, all posh guffaws and irresistible eye-rolls.

Webb is following the footsteps of other famous Woosters here – Richard Briers and Hugh Laurie both excelled in the part – as well as being a direct replacement for Mangan. The latter might have a slightly surer stage presence, but Webb acquits himself well in a show that relies heavily on physical comedy. He bounces around, diving to catch silver cow-creamers, almost-falling out of windows, and leaping onto mantelpieces as if pratfalls, rather than sardonic sketches, were his stock-in-trade. 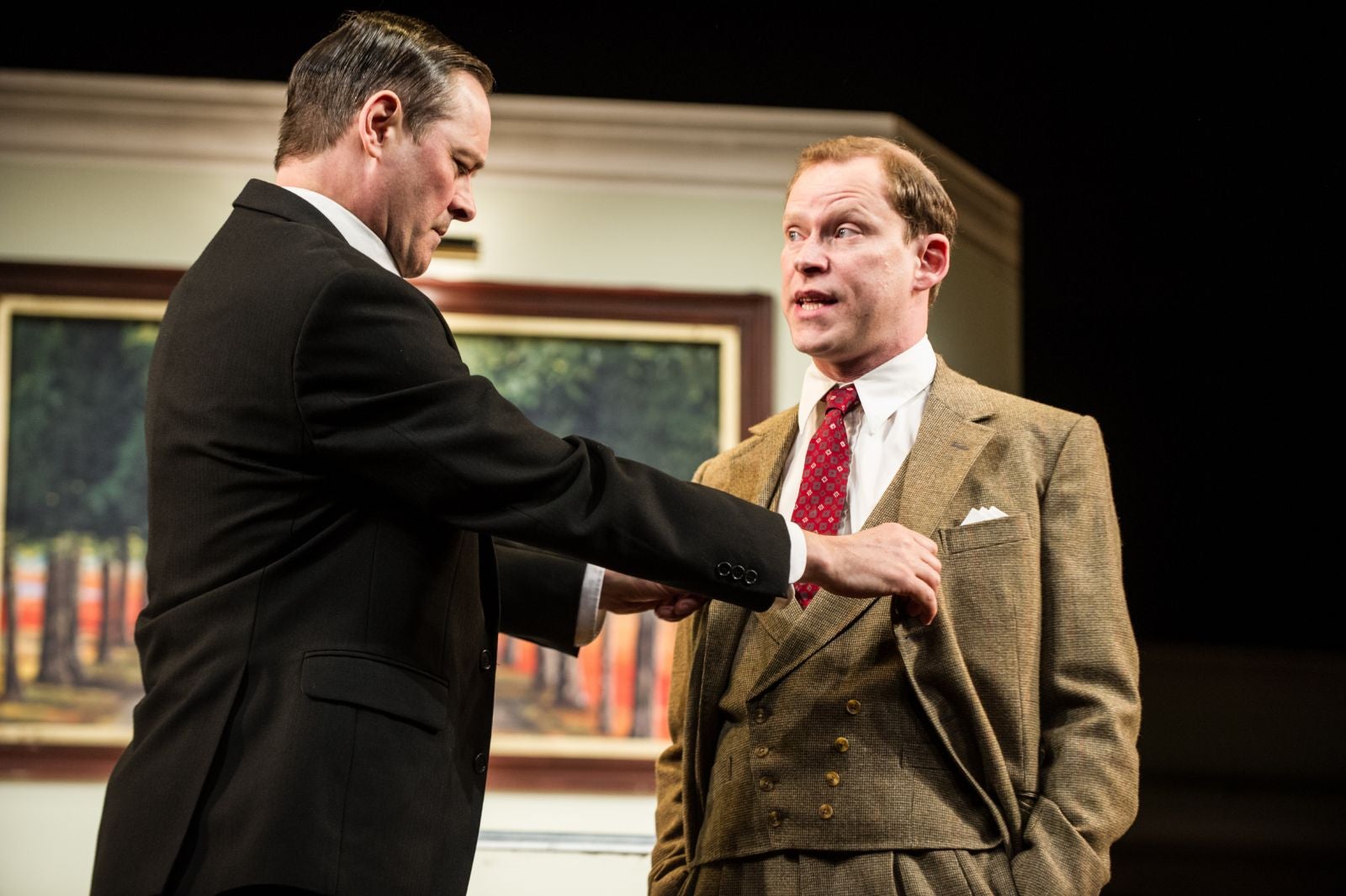 Mark Heap, as Jeeves, does a good deal of the hard work in this play-within-a-play (the conceit is that Bertie has hired out a West End theatre to share an amusing story with the public), shifting scenery and playing aunts, magistrates, fiancés and newt-fanciers as required. He suffers slightly in the comparison with Matthew Macfadyen, who brought a certain dry, wry sensibility to the part that Heap hasn’t quite captured. Since Macfadyen’s most well-known roles have been serious – as Tom in Spooks, or Mr Darcy in the film version of Pride and Prejudice – it’s just that much funnier to see him with a lampshade on his head. Anyone who saw Heap as Dr Alan Statham in Green Wing, doing a semi-obscene dance in a hospital corridor, won’t find his “newt-rutting” gestures quite as shocking as they are intended to be.

The Goodale Brothers, who did this new stage adaptation, made an excellent call when they chose to keep as much of Wodehouse’s original dialogue and exposition as possible. Much of the joy of this play resides in exchanges such as this one, lifted straight from the novel:

“There are moments, Jeeves, when one asks
oneself: ‘Do trousers matter?’”

Or when Roderick Spode, nascent dictator and leader of a group called the “Black Shorts”, is described as having “an eye that could open an oyster at fifty paces”. Mark Hadfield, the third cast member who dashes about, fitting in many of the minor parts, is superb as the Hitler-esque Spode. When Hadfield pops up inside the eight-foot puppet that represents this absurd yet menacing figure, he gets a laugh before he’s even got his wig on straight.

As I noted in my review for theartsdesk.com of the original cast, this play revives a very old theatrical tradition by ending with a dance. It’s arguably the best moment in the whole production – Webb throws his heart and soul into the exuberant charleston, while Heap attempts to execute the dance while keeping Jeeves’ dignity intact. So much comedy is bittersweet that it’s a real treat just to experience some pure, joyful entertainment for a change.