I was fortunate enough to be in Los Angeles recently when the marvellous Beverly Cinema marked the recent death of Karen Black with a screening of a 35mm print of Robert Altman’s Nashville. This is many people’s favourite film among Altman’s work. It’s the point at which he found a storytelling canvas (the screenplay is by Joan Tewkesbury) every bit as multi-layered, ambitious and sophisticated as the techniques he had been pioneering up to that point. You’ll know the sort of thing: multiple actors yapping and improvising away, their overlapping lines picked up by radio-mike technology, while the cameras zoom in and out surreptitiously on actors who could never be entirely sure when, or even if, they were in shot. Personally, I always cite McCabe and Mrs Miller, the woozy western he made four years earlier, as not only my favourite Altman but my most cherished film of all time. Nashville, though, is indisputably a towering piece of work equal to his other greats—The Long Goodbye, Thieves Like Us, Kansas City and Gosford Park.

Robert Altman is also the name I come up with whenever I’m asked who my favourite director is. So it was quite something to sit in the half-full New Beverly last week and hear the audience applauding his on-screen credit at the start of the film. Greeting the names on screen with applause is not something typically seen or heard in a UK cinema, apart from during the end credits at, say, a festival screening where the filmmakers themselves are in attendance. A few of the cast members (including the late Black) received that treatment at the New Beverly, but it was the response to Altman that I found most heartening, possibly because I have worried in the years since his final movie, A Prairie Home Companion, that his work and reputation are slipping from view. 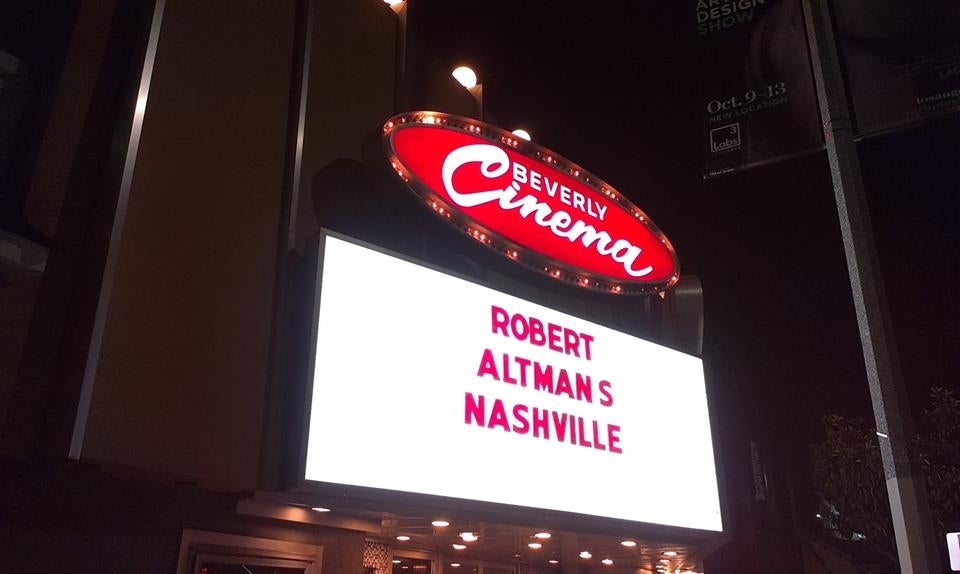 Applause in a cinema is a curious thing anyway. In a theatre it makes perfect sense: the objects of our acclaim are right there to receive it. But living or dead, no one involved in a movie will know they are being applauded if they’re not in the building. In a fundamental way, this is consistent with cinema itself, which is nothing more complicated than the play of light on the wall and sound in our ears, synchronised artificially to create the illusion of life. To adapt the old philosophical saw: if a cinema audience applauds, and none of the cast and crew is around to hear it, what’s the bloody point?

The sweaty, glorious return of Eurovision

My first memory of applause breaking out in a cinema was during a screening of Raiders of the Lost Ark in 1981: I was ten years old, and I recall feeling both perplexed (why was everyone clapping?) but also invigorated, since the response was one of unadulterated and appreciative glee. (Indiana Jones had just dispatched the fancy-pants swordsman with one lethargic gun-shot: the applause was in recognition of a joke so good that laughter alone would not suffice.) I don’t recall hearing it again much in subsequent years; sometimes I even feel embarrassed when a smattering of applause breaks out at some splashy West End preview screening where the audience seems to be clapping themselves for having seen the film first. An exception was the 2003 London Film Festival screening of Dogville, where the crowd’s cheers and catcalls and clapping during the final violent stretch of that movie reflected favourably on the complex levels of provocation which Lars von Trier had packed into his minimalist satirical thriller.

In the case of the response to Altman’s name, it seemed a simple act of celebration and remembrance. Under the right circumstances applause in the cinema engenders a kind of solidarity among the audience members; we (yes, I joined in) were proclaiming that Altman’s worth and significance endures. I suppose a cynic might read something self-congratulatory into the reaction, as though we were applauding ourselves for our excellent taste. I don’t see it that way. It was dignified and respectful. Not to mention unique to cinema. I love on-demand viewing as much as the next binge-watcher but the only noise typically heard at the end of a movie seen at home is the resigned phut of the laptop snapping shut.