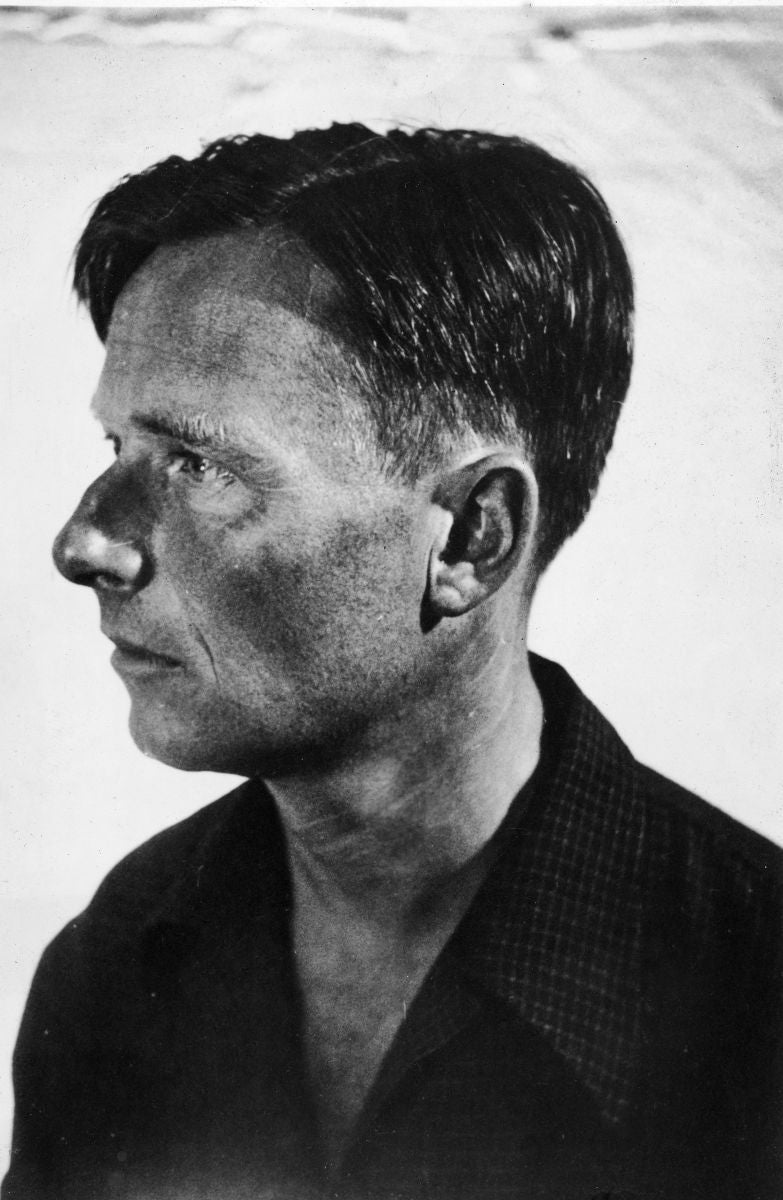 Christopher Isherwood. Image: Getty
In 1952, the then 48-year-old Christopher Isherwood met a beautiful teenage boy on the beach in Santa Monica. None of his friends thought the liaison would last but it proved unexpectedly durable. Despite a 30-year age gap and affairs on both sides, the two men remained emphatically together until Isherwood’s death in 1986 – a relationship considerably longer-lasting than most Hollywood marriages.
Like many couples, they communicated in a private language, a sort of nursery camp in which they were cast as the “Animals”, sometimes beleaguered by the human world (the “Others”) and sometimes resplendent in their difference. The Animals were evidently well established by the time written communication began, on a trip to London in the winter of 1956. They make their inaugural appearance not in the first, rather shy letter from Isherwood but in Bachardy’s reply. “I miss rides through London on old Dobbin,” he writes, “and think a lot about him, sleeping in a strange stable, eating cold oats out of an ill-fitting feed bag and having no cat fur to keep him warm . . . And tell him an anxious Tabby is at the mercy of the RSPCA and counting the days till his return.”
In this pleasurable and increasingly powerful masque, Bachardy is Kitty, a small, well-bred white kitten, while Isherwood is Dobbin, Dub, Drub or Plug, a weary, reliable old horse (sometimes a stallion, sometimes a loyal mare). Gags about riding and furry parts aside, it’s a mode for the establishment and continuance of intimacy, rather than any especially outspoken sexual desire.
When the Animals are separated (most often because Bachardy, a gifted and increasingly adept portrait artist, is in London or New York pursuing commissions), they long to be reunited in their dear dilapidated “basket”. “It seems so wrong and unnecessary for the Animals to be apart,” Bachardy declares in one homesick missive. “Nobody understands about them really.”
There’s plenty going on outside the basket. The letters run intermittently through to 1970, after which there was no separation long enough to require epistolary infill. During that period, Isherwood wrote Down There on a Visit (1962), his late masterpiece A Single Man (1964) and A Meeting by the River (1967); he also worked on film scripts and saw his novel Goodbye to Berlin (1939) transformed for the stage and screen into I Am a Camera and the lucrative Cabaret. Bachardy, meanwhile, schmoozed and sketched on both sides of the Atlantic, producing portraits of an impressive array of artists, aristocrats and writers, among them Francis Bacon, Roman Polanski, Andy Warhol, Frank O’Hara and Tennessee Williams.
Although work is a regular topic of conversation (particularly Bachardy’s sometimes anguished attempts to find his métier), the keynote here is gossip. On Auden at 59, Isherwood notes, “Wystan can never possibly look older,” while Bachardy memorably describes Vanessa Redgrave as a “pod-born replacement for real humans”. Observations on the love lives of the beau monde are traded back and forth like cigarette cards (a pearl for the susceptible: Vivien Leigh’s private number in the 1960s was Sloane 1955).
Gossip is a leveller but one of the oddities of this capacious book is how similar the two voices sound, considering the vast gulf in age and experience, background and nationality. The struggle to bridge these gaps forms the great underlying drama of the letters. Dobbin is Kitty’s mentor and teacher, someone to mimic but also to rebel against, escape and defy, while Kitty is a prodigal whose return will always be an occasion for joy. Isherwood, who had been a serial connoisseur of boys in his youth, wisely gave Bachardy his freedom, allowing him to roam romantically and providing instead the absolute security of home.
In Iris, the critic John Bayley wrote of how he and his first wife, Iris Murdoch, communicated from the start in an infantile babble, a private language that nourished them through the decades, well into her descent into dementia. Virginia Woolf, too, had a penchant for writing in the persona of animals. “I often feel,” Isherwood wrote of his contribution to this canon, “that the Animals are far more than just a nursery joke or a cuteness . . . They express a kind of freedom and truth which we otherwise wouldn’t have.”
At times, the constant references to tiny kittens threatens to contradict him. Yet it becomes increasingly apparent that the Animals sustained the pair through their early travails and that as such they served as the glue for one of the few publicly gay relationships of the period. As Isherwood put it, writing one Christmas Eve from a monastery near Kolkata: “Away from you, I can’t talk, I don’t feel this is my language or my world.” One might think he was talking about the culture shock of India but for the next plaintive sentence: “I want to talk Cat-Horse again.”
Olivia Laing’s latest book is “The Trip to Echo Spring” (Canongate, £20)