Yesterday, Sony Pictures released the first official images of Andrew Garfield’s new costume in Amazing Spider-Man, and soon after, shots of the Garfield in action in and out of costume leaked. 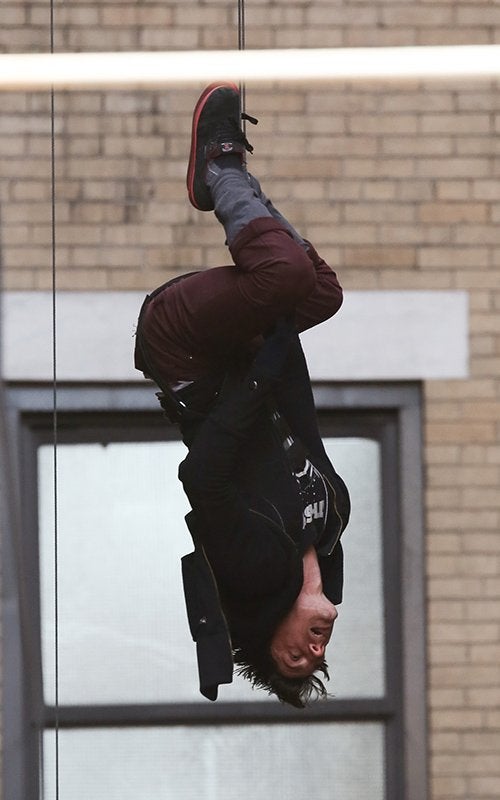 Much discussion ensued about the changes made to the new costume, with these comments from Bleeding Cool a pretty representative cross-section:

As I said in the other thread about his lovely big new white Bagley eyes, I reckon that a lot of the changes Amazing made were not for the sake of making Spidey look better, or to make a better film, but changes that simply had to be made out of necessity in order to just make it so that the film was DIFFERENT from the Raimi movies. Now that that’s done, it certainly looks like they’ve wound things back to a… well, a frankly astonishing level of comic-accuracy.

Impressive how the eyes changed the overall appearance.

This suit honestly couldn’t look any worse to me. Every picture makes me less and less excited for this movie.

Later that day, more paparazzi pics were revealed, of Shailene Woodley, the new Mary Jane Watson, on her way to the set. She doesn’t seem to be in costume, beyond having MJ’s famous red hair, and she’s not made-up or professionally lit either.

So what did commenters think of Woodley?

It’s pretty clear that Gwen would have to die for that girl to have a chance with Peter.

a quick google shows an average looking girl with makeup at best. You can put lipstick on a pig but it’s still a pig.

it must be exceedingly difficult to find a gorgeous girl in Hollywood since they have now failed in two attempts at MJ (Dunst looking good enough in the first one i guess, but deteriorating rapidly in 2 and 3).

That was nothing particular to Bleeding Cool — it was the same everywhere. Den of Geek‘s editor Simon Brew made the admirable decision to take down their post with the shots, writing:

For Den Of Geek – and I’m not saying we have a perfect track record here – can we try and have a conversation over someone’s suitability for a role, rather than judging how they look when a photographer took a quick snap?

I say this as a proudly ugly man, who hated the school playground beauty competitions that most of us have to go through.

People, follow this man’s lead. Comics culture needs to get better in its treatment of women, and fast. Currently it seems to be on a downward trend.