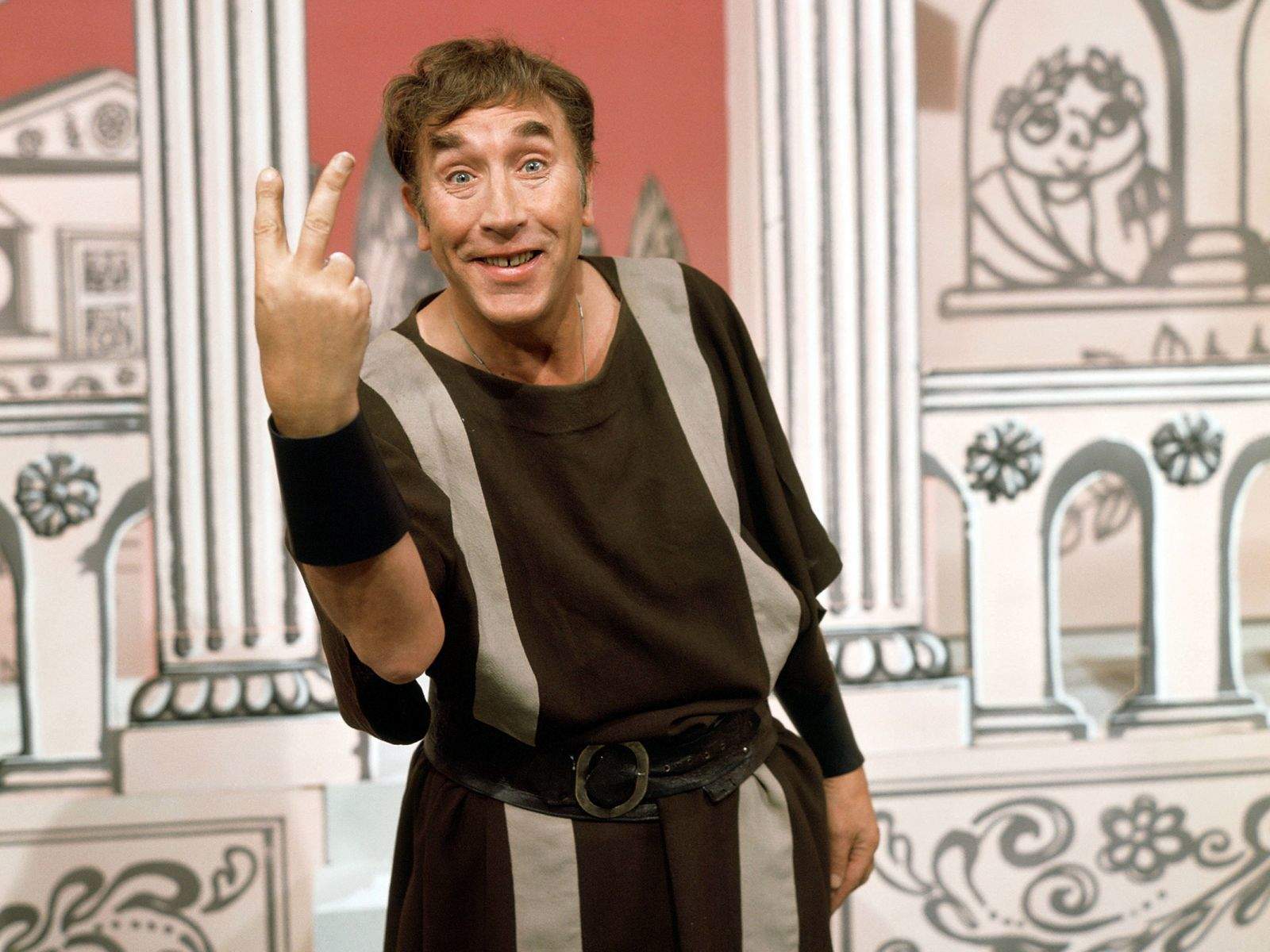 Titter ye may: Frankie Howerd as slave Lucio in Up Pompeii

One evening at a palace dinner party, in about 40AD, a couple of nervous aristocrats asked the emperor Caligula why he was laughing so heartily. “Just at the thought that I’d only have to click my fingers and I could have both your heads off!” It was, actually, a favourite gag of the emperor (he had been known to come out with it when fondling the lovely white neck of his mistress). But it didn’t go down well.

Laughter and joking were just as high-stakes for ancient Roman emperors as they are for modern royalty and politicians. It has always been bad for your public image to laugh in the wrong way or to crack jokes about the wrong targets. The Duke of Edinburgh got into trouble with his (to say the least) ill-judged “slitty-eyed” quip, just as Tony Abbott recently lost votes after being caught smirking about the grandmother who said she made ends meet by working on a telephone sex line. For the Romans, blindness – not to mention threats of murder – was a definite no-go area for joking, though they treated baldness as fair game for a laugh (Julius Caesar was often ribbed by his rivals for trying to conceal his bald patch by brushing his hair forward, or wearing a strategically placed laurel wreath). Politicians must always manage their chuckles, chortles, grins and banter with care.

In Rome that entailed, for a start, being a sport when it came to taking a joke, especially from the plebs. The first emperor, Augustus, even managed to stomach jokes about that touchiest of Roman topics, his own paternity. Told that some young man from the provinces was in Rome who was his spitting image, the emperor had him tracked down. “Tell me,” Augustus asked, “did your mother ever come to Rome?” (Few members of the Roman elite would have batted an eyelid at the idea of some grand paterfamilias impregnating a passing provincial woman.) “No,” retorted the guy, “but my father did, often.”

Where Caligula might have been tempted to click his fingers and order instant execution, Augustus just laughed – to his lasting credit. The Romans were still telling this story of his admirable forbearance 400 years later. And, later still, Freud picked it up in his book on jokes, though attributing it now to some German princeling. (It was, as Iris Murdoch puts into the mouth of one of her angst-ridden characters in The Sea, The Sea, “Freud’s favourite joke”.)

It also entailed joining in the give-and-take with carefully contrived good humour and a man-of-the-people air (I suspect Nigel Farage would have gone down horribly well in ancient Rome). The same Augustus once went to visit his daughter and came across her being made up, her maids plucking out the grey hairs one by one. Leaving them to it, he came back later and asked casually, “Julia, would you rather be bald or grey?” “Grey, of course, Daddy.” “Then why try so hard to have your maids make you bald?”

Julia wasn’t usually quite such a push­over. She was one of the few Roman women celebrated for her own quips (which were published after her death, risqué as some of them were). When asked how it was that her children looked liked her husband when she was such a notorious adulteress, she equally notoriously replied, “I’m a ship that only takes passengers when the hold is full”; in other words, risk adultery only when you’re already pregnant.

Unlike Augustus, “bad” politicians repeatedly got the rules of Roman laughter wrong. They did not joke along with their subjects or voters, but at their expense. The ultimate origin of the modern whoopee cushion is, in fact, in the court of the 3rd-century emperor Elagabalus, a ruler who is said to have far outstripped even Caligula in luxury and sadism. He would apparently make fun of his less important dinner guests by sitting them on airbags, not cushions, and then his slaves would let out the air gradually, so that by the middle of the meal they would find themselves literally under the table.

The worst imperial jokes were even nastier. In what looks like a ghastly parody of Augustus’s quip about Julia’s grey hairs, the emperor Commodus (now best known as the lurid anti-hero, played by Joaquin Phoenix, of the movie Gladiator) put a starling on the head of a man who had a few white hairs among the black. The bird took the white hairs for worms, and so pecked them out. It looked like a good joke, but it caused the man’s head to fester and killed him.

There were issues of control involved, too. One sure sign of a bad Roman ruler was that he tried to make the spontaneous laughter of his people obey his own imperial whim. Caligula is supposed to have issued a ban on laughter throughout the city after the death of his sister – along with a ban on bathing and family meals (a significant trio of “natural” human activities that ought to have been immune to political interference). But even more sinister was his insistence – the other way round – that people laugh against their natural inclinations. One morning, for instance, he executed a young man and forced the father to witness his son’s execution. That same afternoon he invited the
father to a party and now forced him to laugh and joke. Why did the man go along with it, people wondered. The answer was simple: he had another son.

Self-control also came into the picture. The dear old emperor Claudius (who was also renowned for cracking very feeble – in Latin, frigidus, “cold” – jokes) was a case in point. When he was giving the first public reading from his newly composed history of Rome, the audience broke down at the beginning of the performance because a very large man had caused several of the benches to collapse. The audience members managed to pull themselves together but Claudius didn’t; and he couldn’t get through his reading without cracking up all the time. It was taken as a sign of his incapacity.

Roman histories and biographies are full of cautionary tales about laughter, used and misused – told, for the most part, to parade the virtues or vices of emperors and rulers. But just occasionally we get a glimpse from the other side, of laughter from the crowd, from the underlings at court, or laughter used as a weapon of opposition to political power. Romans did sometimes resort to scrawling jests about their political leaders on their city walls. Much of their surviving graffiti, to be honest, concentrates on sex, trivia (“I crapped well here”, as one slogan in Herculaneum reads) and the successes of celebrity gladiators or actors. But one wag reacted to Nero’s vast new palace in the centre of Rome by scratching: “Watch out, citizens, the city’s turning into a single house – run away to Veii [a nearby town], unless the house gobbles up Veii, too.”

But the most vivid image of the other side of political laughter comes from the story told by a young senator, Cassius Dio, of his own experiences at the Colosseum in 192AD. He’d nearly cracked up, he explains, as he sat in the front row watching a series of gladiatorial games and wild beast hunts hosted by the ruling emperor Commodus.

Commodus was well known for joining in these performances as an amateur fighter (that’s where Gladiator gets it more or less right). During the shows in 192, he had been displaying his “combat” skills against the wild beasts. On one day he had killed a hundred bears, hurling spears at them from the balustrade around the arena. On other days, he had taken aim at animals safely restrained in nets. But what nearly gave Dio the giggles was the emperor’s encounter with an ostrich.

After he had killed the poor bird, Commodus cut off its head, wandered over to where Dio and his friends were sitting and waved it at them with one hand, brandishing his sword in the other. The message was obvious: if you’re not careful, you’ll be next for the chop. The poor young senator didn’t know where to put himself. It was, he claims, “laughter that took hold of us rather than distress” – but it would have been a death sentence to let it show. So he plucked a leaf from the laurel wreath he was wearing and chewed on it desperately to keep the giggles from breaking out.

It’s a nice story, partly because we can all recognise the sensation that Dio describes. His anecdote also deals with laughter as a weapon against totalitarian regimes. Dio more or less boasts that he found the emperor’s antics funny and that his own suppressed giggles were a sign of opposition. What better than to say that the psychopathic tyrant was not scary but silly?

Yet it cannot have been quite so simple. For all Dio’s bravura looking back on the incident from the safety of his own study, it is impossible not to suspect that sheer terror as much as ridicule lay behind that laughter. Surely Dio’s line would have been rather different if some burly thug of an imperial guard had challenged him on the spot to explain his quivering lips?

My guess is that those frightened aristocrats at the court of Caligula would have laughed in terror (or politely) at the emperor’s murderous “joke”. But, back home safely, they would have told a bold and self-congratulatory story, much as Dio did: “Of course, we couldn’t help but laugh at the silly man . . . !”

The truth is that, in politics as elsewhere, no one ever quite knows why anyone else is laughing – or maybe not even why they themselves are laughing.

“Laughter in Ancient Rome” by Mary Beard is published by University of California Press (£19.95)

Mary Beard will be in conversation with NS contributing editor Laurie Penny on 30 July at Conway Hall, London. More details and tickets here