Anyone passing the Fletcher household early this morning would have heard a whoop of purest joy. The Liberal Democrats had trounced Boris Johnson’s Conservatives in the North Shropshire by-election. After five years of ideological extremism, shameless populism, lies, division, sleaze and incompetence, this was an astounding victory for decency, honesty, moderation and collaboration. As the victorious Lib Dem candidate Helen Morgan said, the result was truly a “gift of hope for our country just in time for Christmas”.

“Oh, it’s just a by-election – a one-night wonder,” Johnson apologists (the few that remain) will argue. But it’s not. This far exceeded any normal by-election result. The Libs Dems turned a massive 22,949 Tory majority in 2019 into a 5,925 majority for Morgan. The 34 per cent swing was the seventh biggest in by-election history. Before yesterday, North Shropshire had returned a Tory MP in every election since the constituency was created in 1832.

No dramatic Omicron announcements, or photographs of baby Romy, were going to knock this by-election result off the top of the news agenda. It was, by any standards, a spectacular repudiation of our rotten Prime Minister and the corrupt cult that his party has become. It was achieved not in some bastion of anti-Brexit metropolitan elitism such as Richmond, or Chesham and Amersham, but in a rural constituency far from London that had voted solidly for Leave in the 2016 EU referendum.

As John Curtice, the electoral guru, observed, this by-election measured 8.5 on the Richter scale, and what makes the Tories’ defeat all the more delicious is that it was so unnecessary. Had Johnson accepted that Owen Paterson, the constituency’s disgraced former MP, had blatantly broken Westminster’s lobbying rules instead of seeking so arrogantly to protect his crony, Paterson would simply have served a 30-day suspension and the scandal would quickly have been forgotten. 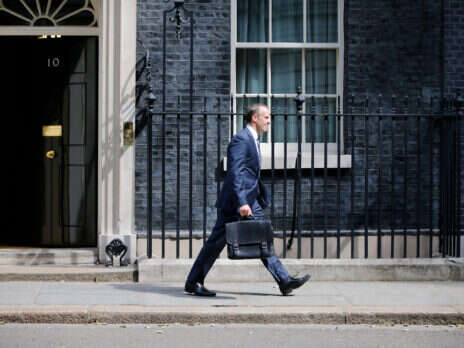 “Oh, it was just the Christmas parties,” Johnson apologists will then counter. But that’s not true either. “Partygate” merely crystallised so much that ordinary, decent citizens find repellent about Johnson and his squalid crew. Their arrogance. Their self-entitlement. Their rank dishonesty. Their refusal to apologise. Their double standards. Their elitist contempt for the little people that they claim to champion.

It was of a piece with Johnson giving lucrative jobs and peerages to his cronies, awarding huge Covid contracts to the well-connected but totally unqualified, accepting luxury holidays and an exorbitant flat refurbishment from wealthy supporters, protecting loyal ministers and aides who bully or bend planning rules or blatantly breach Covid rules.

As Morgan said in a victory speech that was all the more powerful for being delivered by someone with little gift for high-flown rhetoric, the people of North Shropshire, including thousands of natural Conservatives, declared that they were fed up with a government “run on lies and bluster”, with being “taken for granted”, with the “nightly soap opera of calamity and chaos”.

Of course a general election would be different. Nobody in their right mind would expect the Tories to lose their 76th safest seat. But the voters of North Shropshire have issued some very clear warnings.

They have shown that Johnson is no longer an electoral asset to the Conservative Party and that it should seriously think of replacing a leader it has always known to be a total charlatan. As Morgan said, she won with the help of “thousands of lifelong Conservative voters dismayed by Boris Johnson’s lack of decency and fed up with being taken for granted”.

His cover is blown. Voters are finally seeing through his boosterism, his over-promising, his essential vacuity, his inability to run the proverbial whelk stall. There is no way an innately amoral, narcissistic, incompetent Prime Minister can, or will, radically change his behaviour. His net approval rating is a jaw-dropping -35, and even the most diehard Tory newspapers are now rounding on him.

The voters of North Shropshire have shown that Brexit – the issue Johnson has for so long and so cynically exploited to whip up his base against those wicked Remoaners – is losing its potency. A constituency that was overwhelmingly Conservative and pro-Leave is now sending to Westminster a member of Britain’s most unequivocally pro-EU party. Anecdotal evidence suggests, moreover, that North Shropshire’s many farmers are having serious second thoughts about the wisdom of Brexit.

Lastly, but certainly not least, North Shropshire’s voters have shown that Britain’s progressive parties can defeat the Tories if they work together. Labour did not stand down its candidate in North Shropshire, but the party’s leadership appears to have tacitly agreed to put in minimum effort. The electorate had no doubt who the main challenger was. Morgan enjoyed a more or less clear run, just as the Lib Dems gave Labour’s candidate a more or less free run in the recent Bexley and Sidcup election.

In her victory speech Morgan graciously thanked the constituency’s Labour voters for lending her their votes. Choosing her words carefully, she said: “You have shown tonight that together we can defeat the Conservatives not with deals behind closed doors, but with common sense at the ballot box.”

Large-scale tactical voting was almost impossible at the last election. Moderate Tories and other centrists, though disgusted by Johnson, were terrified of voting Labour or Lib Dem for fear of letting Jeremy Corbyn into Downing Street. Similarly, moderate Labour voters appalled by Corbyn refrained from voting Lib Dem for fear of a Johnson government.

That dynamic will not apply next time round. Unlike Corbyn, Keir Starmer is a credible prime minister. The result in North Shropshire strongly suggests that voters are now ready and willing to back the candidate most likely to defeat the Tory. As a headline in the Daily Telegraph, traditionally Johnson’s paymaster and mouthpiece, declared this morning, it was his “Nightmare Before Christmas”.