Today’s CBI report (pdf) into education and skills in the workplace is largely focused on relations between employers and schools:

51 per cent of the surveyed provided careers advice. Despite this, 68 per cent said that the general quality of advice was still not good enough. More than 60 per cent of respondents said they would like to play a greater role in delivering careers advice.

In other areas, more than 70 per cent of employers provided work experience to students and around 29 per cent of them acted as governors.

As a result, it has been mostly reported as an attack on schools. See, for example, the Telegraph’s story, headlined “School leavers ‘unable to function in the workplace'”:

Figures show that 42 per cent of companies now stage lessons in core subjects because young people are unable to function in the workplace.

The Confederation of British Industry said that too many school leavers struggled to write to the necessary standard, employ basic numeracy or use a computer properly.

Almost two-thirds of business leaders also said that teenagers were failing to develop vital skills such as self-management and timekeeping at school.

But one of the most interesting chapters is instead the one focusing on university graduates.

Some of the data will be a blow to students studying… well, anything other than science, technology, engineering or maths (STEM), really:

There’s also a slight embarassment for the government buried in the chapter. Back when the notorious rise in tuition fees was first being talked about, in November 2010, the goverment’s line was clear. Michael Gove, for instance, told the Today Programme:

I believe that [higher fees] won’t put off students. They will make a rational decision on the benefits that accrue to them [from going to university].

19 months on, and with the first cohort just about to head to university, it is clear that CBI members don’t share the government’s optimism. A third of all respondents are planning to increase the number of routes through which school leavers can enter their business without having to go to university. Among the largest employers (with moret than 5,000 employees), two thirds are expanding those routes.

In addition, 63 per cent of employers expect the graduate market to change substantially in the coming years, and are preparing for a number of different impacts: 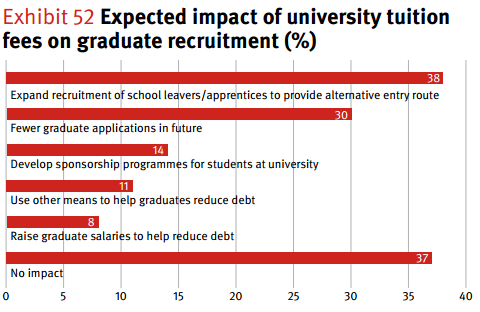 At least a third, and up to two thirds, of businesses believe what most people believe: that higher tuition fees have likely put students off applying to university. While this is certainly true for this years intake, we’ll only know the full story once the applications for the 2013 cohort are released. If they stay low, it could be a black eye for the government.