The UK economy expanded at a healthy speed of 1.8 per cent last year according to official data. The economy performed better than most pre-EU referendum forecasts, encouraging some to argue that the forecasting community was too pessimistic about Brexit. That is false.

To start with, UK growth plateaued last year just when global growth and in particular Euro Area growth accelerated. Without the Brexit shock, the UK would have participated more fully in that recovery and economic growth may well have been much higher. On our calculations, the surprising strength in global growth added something like 0.5 percentage points to UK GDP growth in 2017.

Next, the Bank of England had to step in with additional stimulus measures that included a rate cut, more quantitative easing and also support for banks. All that helped restore confidence and lift economic growth.

The National Institute of Economic and Social Research published a number of studies before the referendum with estimates of the economic costs of Brexit. The broad conclusion was that the overall cost over the long run will be around 8 per cent of GDP. In this context, the results from the recently leaked study by the Department for Exiting the European Union (DExEU), that GDP would decline by between 2 and 8 per cent depending on the type of exit, seem entirely realistic. Extracting itself from a deeply integrated market like the EU has a real economic cost. The UK is starting to bear that cost, even before it formally leaves the Union.

We have re-iterated that view in our latest forecast. Under our central forecast, real GDP grows at around 2 per cent this year and next, but this forecast assumes a “soft” Brexit where the UK maintains close to full access to the EU market.

Of course, talks could fail and the UK could find itself out of the EU and without a trade agreement. In this scenario, we believe that the UK would experience a recession in 2019 and deep long-term wounds. The immediate introduction of tariffs and other barriers to trade would hurt both exports to and imports from the EU. Sterling would depreciate further leading to higher consumer prices and over time the UK would suffer a loss in productivity. Over the next 10 years, under this scenario, annual GDP per capita would be reduced by up to 6 per cent, or £2,000 in today’s money. These estimates are very similar to our earlier studies.

As it happens, we believe that an ambitious deal is possible, but it will require concessions from the UK. The Prime Minister stated that she wants to achieve the “freest and most frictionless” trade possible between the UK and the EU, while putting an end to both the freedom of movement of labour between the UK and the EU and the jurisdiction of the Court of Justice of the European Union (CJEU) in the UK. She also wants to stop financial contributions to the EU budget. Unfortunately, we think that the UK won’t be able “to have its cake and eat it”.

The figure below is a visual representation of the trade-off that the UK faces. The vertices of the triangle correspond to full market access, complete freedom of movement of people and size of the financial contribution (as a percentage of Gross National Income). Norway had to agree to significant financial contributions (“Norway Grants”) to have close to full access to the single market. Switzerland, which enjoys less market access that Norway, allows close to complete freedom of movement of labour. As the triangle shows, its budgetary contribution is relatively small. Finally, the trade deal with Canada (CETA) is less extensive that Switzerland and is essentially restricted to just goods. Canada does not make a budgetary contribution. 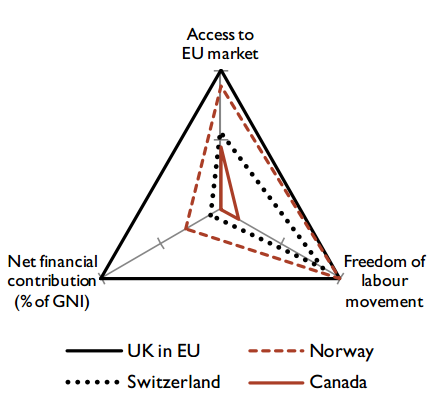 The EU has many other trade deals with countries both in and outside Europe and each of these can be represented in this figure, but all of them without exception include a heavy dose of concessions. Choosing what to compromise on – financial contribution, or some degree of freedom of movement of persons – is a difficult political decision, but it is key to giving businesses the clarity and confidence they need.

The longer the negotiation, the more damage will be inflicted to both economies, with a disproportionately large effect on the UK. There is no magic, self-regenerating cake. The PM needs to finally acknowledge that and spell out to the British people what the available choices are.