In May, a group ominously titled the “Detroit Blight Removal Task Force” released a report claiming that around 22 per cent of the city’s properties were “blighted” – vacant, damaged or considered dangerous. They also found that, of the 84,000 properties owned by public entities, just over 5,000 were occupied by squatters, making the city of Detroit, the report’s authors noted, “a very large and inadvertent landlord”.

The task force’s proposed solution is to demolish it all over the next five years and start again. Unfortunately, the plan doesn’t extend to rebuilding the properties – it’ll be down to private companies and developers to buy up the land and rebuild.

First on the city’s agenda is removing empty family homes, a move that, paradoxically, is intended to stem the free-fall in the city’s population. In 1950, Detroit’s population stood at 1.85 million, but it’s fallen to 700,000 as residents leave for the suburbs or other cities in the face of the shrinking industry and rising crime.  Cleaning up the neighbourhoods, the thinking goes, will entice suburb-dwellers back to central Detroit.

UK inflation 2022: What stagflation means for the cost-of-living crisis

All this will cost the city around $850m. In total, the plan will cost $2bn – around $3,000 per city resident. That’d be painful enough, even if the city hadn’t filed for bankruptcy in July 2013 with debts of around $20bn, giving it the dubious honour of being the largest US city ever to go broke.

To help take some of the pressure off, the Mayor’s office has also launched Building Detroit, a house auction site, intended to sell some of the blighted homes; the lucky buyers will then be responsible for fixing them up so the city government doesn’t have to. The programme has seen houses sold at anything from the bargain rate of $40,000, right down to the rock bottom price of $1,000. Mayor Mike Duggan has been doing his bit by waving the gavel on his Facebook page. 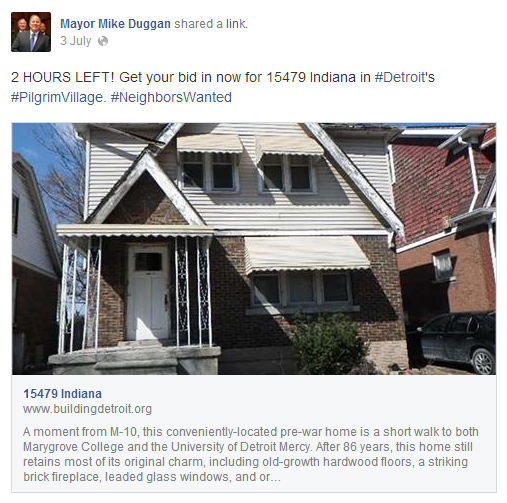