The argument goes like this: Our wealth creators are chomping at the bit to hire more people, produce more output, and sell more stuff. The only problem is that nasty government regulations are stopping them from doing it. Scrap those regulations, and bust turns to boom!

It’s an appealing argument to many in the Conservative party, because it has the side effect of shifting the blame for slow growth from macroeconomic policies—particularly the historic failure of austerity. It also lets Tories express sympathy with the aims of policies like a minimum wage, health and safety regulations, or employment protections, without actually committing to keep them.

Small wonder that Conservatives as diverse as Louise Mensch, party donor Adrian Beecroft and the Institute of Directors think-tank have all expressed a desire to slash “red tape”, particularly when it comes in the form of regulations protecting employees against their bosses.

But their starting premise is wrong. Business executives—the archetypal “wealth creators” if any are—aren’t chomping at the bit to deregulate. In fact, they’re far more concerned about their inability to borrow and the difficulty they have paying taxes, as they tell the World Economic Forum:

It’s not just big businesses. In August 2012 the Department for Business, Enterprise and Skills asked 500 heads of small and medium sized enterprises about what they considered the main obstacle to success. “The state of the economy” was the biggest issue, listed by 45 per cent and “obtaining finance” was next, mentioned by 12 per cent. After this came taxation, cashflow, competition and regulations—just 6 per cent listed regulations as their main concern.

In Britain, part of the reason businesses don’t care about red tape is that it’s all part of the level playing field. The minimum wage doesn’t hurt small businesses if all their competitors have to pay it as well. But, as Louise Mensch points out, there’s the international context to take into account as well:

“The left think they’re helping working people by providing more rights”, she told the Observer in 2011. “But all that actually happens is you create poverty and despair, because jobs go to your competitors who have fewer rights for workers.”

In fact, you have to look hard to find competitors to Britain who have fewer rights for workers. By international standards, the UK is not heavily regulated at all. In fact, when the OECD assessed the strength of employment protections across all its member nations, the UK was third from the bottom. Apart from the US and Canada, we have the least employment red tape in the developed world: 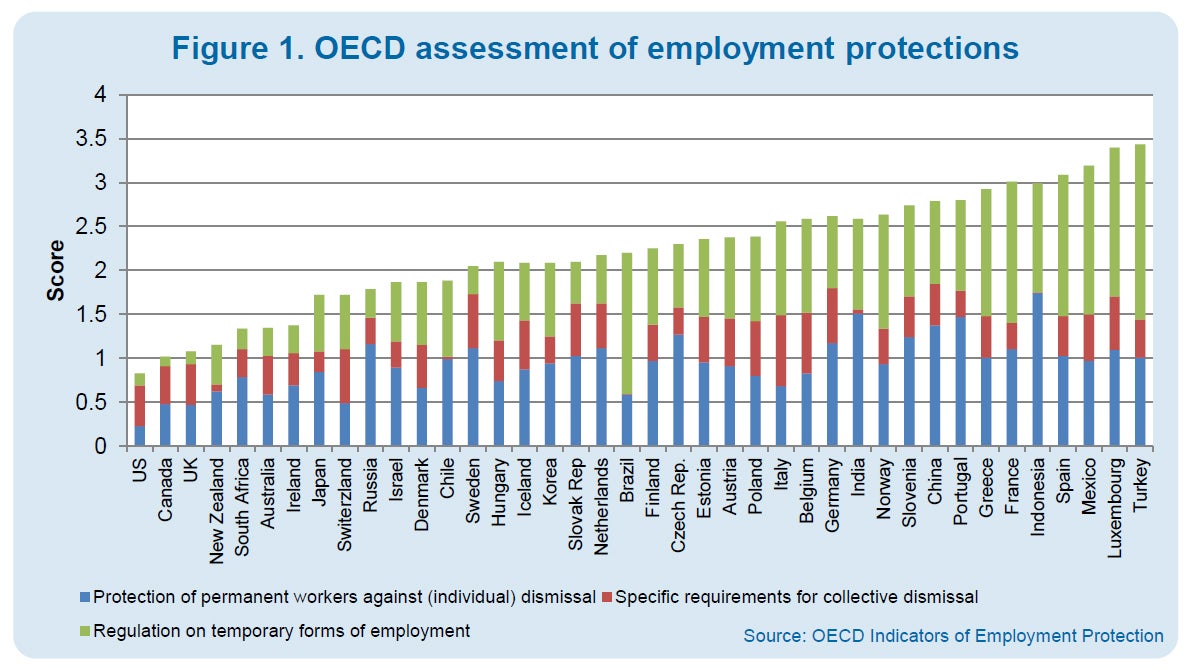 And when we look at the protections workers have against unfair dismissal – a specific protection attacked by Adrian Beecroft’s 2011 report on employment law – the UK is even closer to being the “freest” nation in the world. Only the US has fewer protections than us: 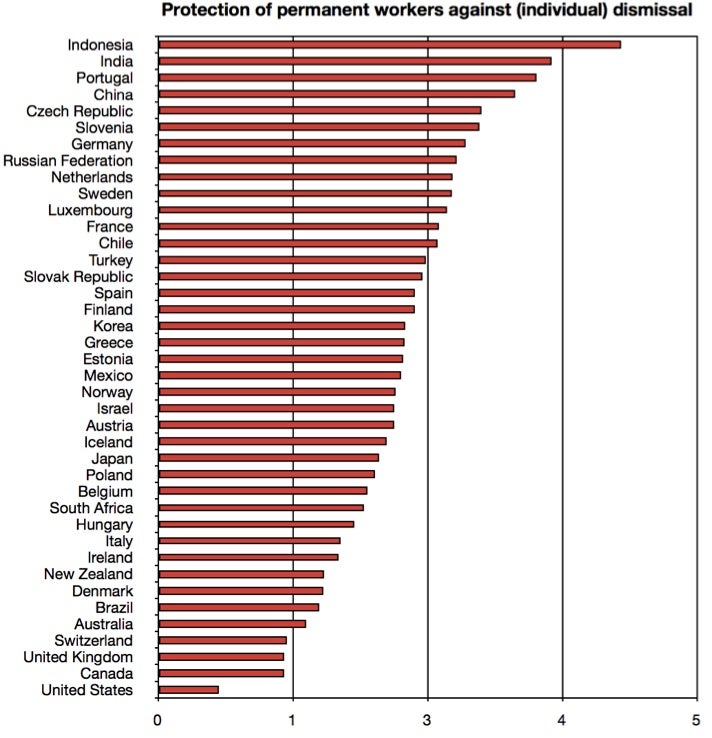 But the most important aspect of regulations is frequently missed in discussions of whether they hurt businesses: regulations have direct benefits. It’s a point made alarmingly infrequently in a climate where the burdens of regulations are brought up on a monthly basis.

For instance, the minimum wage has costs—to businesses, which have to pay higher wages, but also theoretically to workers, who may find that they aren’t employable for that much. The minimum wage also has benefits. It boosts the income of the lowest paid and as such is a very effective way to boost aggregate demand. It can also increase productivity in a number of ways.

None of this should obscure the most important point: the poorest paid people in society suddenly have more money. That’s not a by-product; it’s the entire aim. And discussing what businesses think about the burden without acknowledging that benefit will always result in a skewed conclusion.

For more, take a look at our article produced with nef and the Tax Justice Network as part of their “Mythbusters” series, addressing the myth that “red tape” is preventing the recovery.