Counterfactuals are tricky. How can we know for certain what the British economy would look like if austerity had never been implemented?

Well, we can’t be certain. But with a few assumptions, we can ale an educated guess, and that’s precisely what Alan Taylor has done at VoxEU. The assumptions he makes aren’t uncontroversial, but they are easily defensible, and the results are stunning.

First, we have to assume that the government actually did have the ability to avoid austerity. That is, if Osborne hadn’t rapidly started to slash the state, would the bond markets have refused to loan to us shortly after? It seems unlikely, especially given, as Taylor points out, gilt yields remain incredibly low despite our debt-to-GDP level rising and our real GDP worse than predicted. The bond market basically doesn’t care about the national debt, at least while it’s at the levels it is now; instead, as opportunities for investment have frozen worldwide, yields in the UK have collapsed, along with those in the US and Japan.

So the UK didn’t have to implement austerity; it was a choice. The second assumption is that policymakers “care about timing fiscal adjustments so as to mitigate damage to the real GDP path of the economy”, and won’t just splurge the money wherever they can find political support for it. That is a fairly weighty assumption, to be sure, and one which a lot of people working at the intersection of politics and economics might question. At the same time, though, it’s a pretty necessary assumption to do much thinking about macroeconomics, not least because if you assume politicians are idiots, it becomes pretty hard to justify any state spending at all.

If you buy those two basic assumptions, Taylor writes, then you can start to work backwards from the observed effects of austerity in other countries to build up the counter-factual. This part is just the same as we’ve seen again and again: austerity hurts growth. A lot.

Last year, for instance Paul Krugman did a rough-and-ready calculation and estimated that cutting budgets by 1 per cent of GDP since the recession reduced GDP by around 1.25 per cent. That’s not supposed to be generalizable – but it does seem true for a specific time (2008-2012) and place (Europe).

Taylor’s model is far more robust: it takes account of allocation bias (the fact that the state of a country’s economy may have influenced whether or not it applied austerity measures), and also allows for the fact that austerity has different affects applied in a boom or slump. And it finds a massive effect in a slump, compounded by the fact that, as Taylor says, “a dead cat bounces”: given we’d expect more future growth the deeper in a slump we are (as the economy catches up with where it should be), there’s a tendency to underestimate the damage of austerity.

But this is all preamble. You’re here for the money shot. How much has austerity cost Britain? Three per cent of GDP: 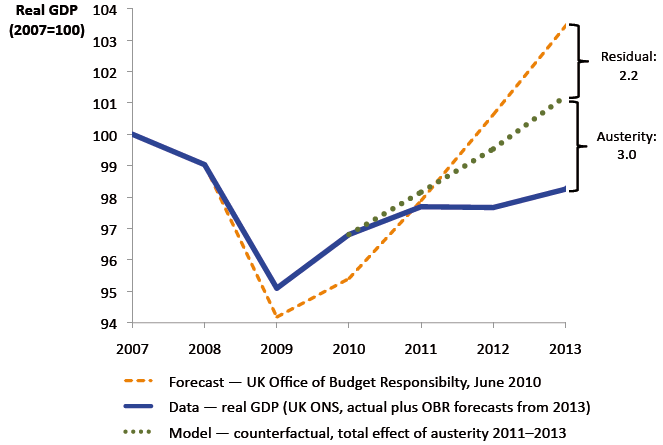 Simon Wren-Lewis amortises that across the UK: it comes to £3,500 for every UK household over those three years. Bear that in mind next time you hear the government talking about how much our welfare bill is. Once upon a time, we had that money.