The Wall Street Journal reports on the perils of providing early access to sensitive economic data:

The early look at the consumer-sentiment findings comes from Thomson Reuters Corp. The company will pay the University of Michigan $1.1 million this year for rights to distribute the findings, according to the university. Next year, it will pay $1.2 million.

Those who pay for Thomson Reuters’s regular news services get the report two seconds later. At that point, it swiftly becomes widely available through other news providers as well.

Take a look at what happens to the trading volume in those two seconds: 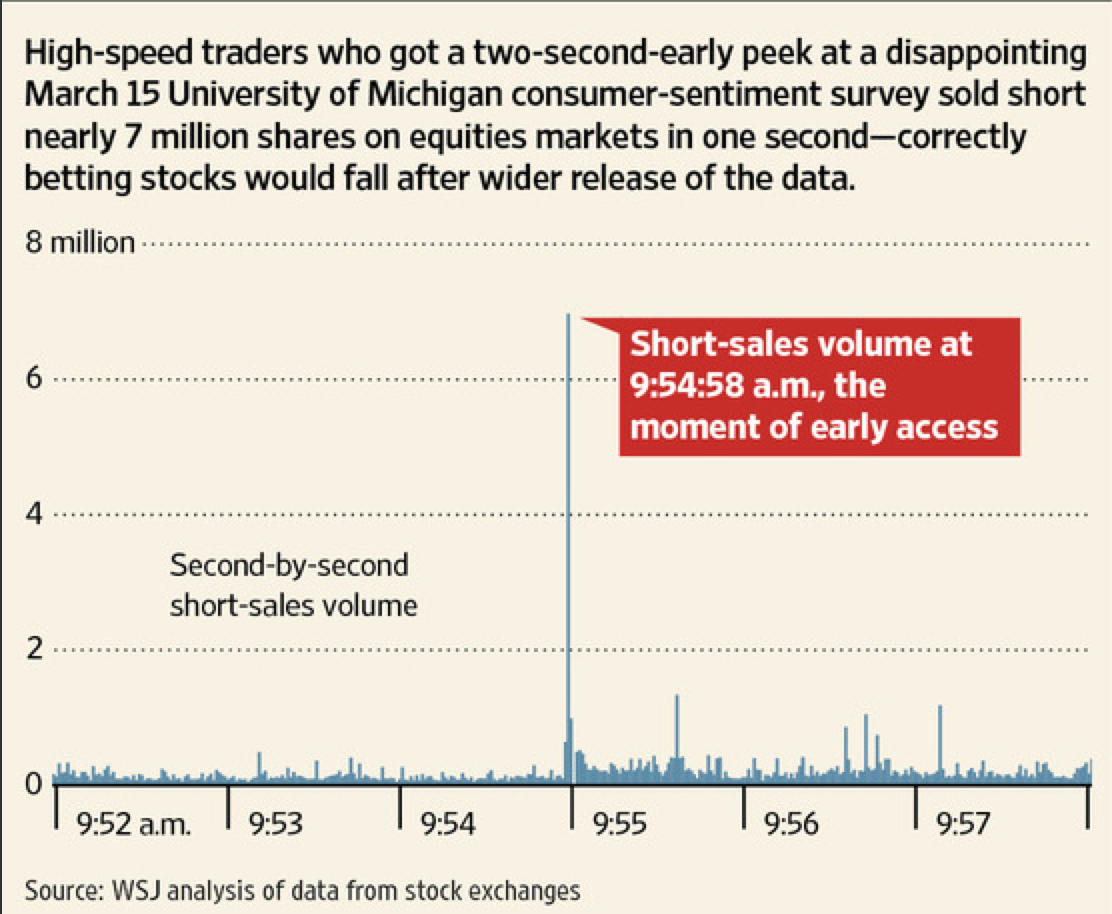 That obviously makes sense. If you pay thousands of dollars for an advance connection, you’re presumably doing to want to act on it. That two-second preview gives anyone who can afford it and some algorithms smart enough to parse the information a huge advantage in the market.

Except that every trade needs a counterparty. That is, if bad data comes out and you decide to sell some shares, someone else needs to buy them. If you know that some people in the market have access to secret data which you will get in less than two seconds, the reasonable thing to do is not trade for the next two seconds. Who are these idiots who make willing counterparties to traders with inside information?

One possibility is that people are leaving buy or sell orders open over the period of the release. So, for instance, if you decide on Monday that you want to buy a share of Acme Corp. for $100 when it’s trading at $105, you may end up being stuck with it if the value plunges to $90 in two seconds on Tuesday. Of course, that’s still a certain amount of stupidity, but it makes it easier to understand criticism that early access to such data hurts so-called “mom and pop” traders.

But there’s another possible explanation, which is that all these trades are between people with early access to the data. We might both think the information is bad, but if you think its worse than I do, I may well be prepared to buy from you – albeit at a price lower than I would have before I found out the news. And if the release is borderline, it’s even more likely that the counterparties also have information. Everyone thinks they’re smarter than the crowd, otherwise they wouldn’t bother trading.

If that’s the case, then there are still dummies in the mix; but they’re the ones paying thousands of dollars a month for the chance to take a stab in the dark two seconds before the general public.