One of the many myths busted by today’s report from the Parliamentary Commission on Banking Standards is that bankers’ pay has fallen significantly since the crash. In his testimony to the inquiry, George Osborne noted estimates that the total City bonus pool fell from from £11.5bn in 2006 to £1.5bn in 2013, while Anthony Browne, the head of the British Bankers Association, pointed out that since 2007, cash bonuses are down 77 per cent and the total bonus pool has more than halved.

But what neither mentioned is that bankers have compensated themselves by simply claiming higher basic salaries. As the report notes, total remuneration across RBS, Lloyds, HSBC and Barclays has remained relatively stable. Indeed, since staff numbers have fallen significantly, per-capita remuneration has actually increased. As the graph below shows, pay at most banks has already returned to or exceeded its pre-crisis level. 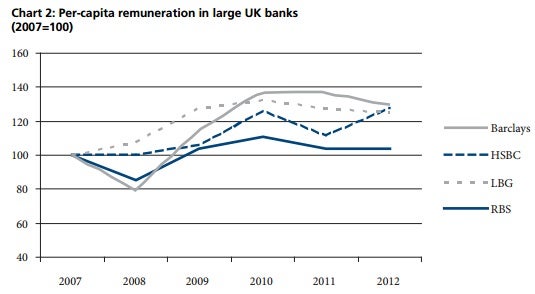 The report rightly goes on to argue:

Public anger about high pay in banking should not be dismissed as petty jealousy or ignorance of the operation of the free market. Rewards have been paid for failure. They are unjustified. Although the banks and those who speak for them are keen to present evidence that bonuses have fallen, fixed pay has risen, offsetting some of the effect of this fall. The result is that overall levels of remuneration in banking have largely been maintained. Aggregate pay levels of senior bankers have also been unjustified. Given the performance of the banks, these levels of pay have produced excessive costs. Indeed, at a time of pay restraint in the public and private sectors, they will raise significant anger amongst taxpayers who have been required to subsidise these banks. These elevated levels of remuneration are particularly unacceptable when banks are complaining of an inability to lend owing to the need to preserve capital and are also attempting to justify rises in charges for consumers.

But while the bankers have already recovered all the losses from the crisis, average household incomes are not expected to return to their pre-recession level until 2023 (£22,000 in real terms). Another timely reminder, then, that we’re not “all in this together”.