The French economy has fallen into recession for the third time in four years, with official figures this morning showing a contraction of 0.2 per cent for the first quarter of 2013.

That’s worse than forecasters expected, and follows another 0.2 per cent contraction in the last three months of 2012. The French statistical agency reports that the bulk of the contraction comes from a shrinking trade balance; while exports fell by 0.5 per cent, imports “reached stability”, growing by just 0.1 per cent. At the same time, household consumption expenditure was “almost stable” – this time, the euphemism means “shrinking by 0.1 per cent”. 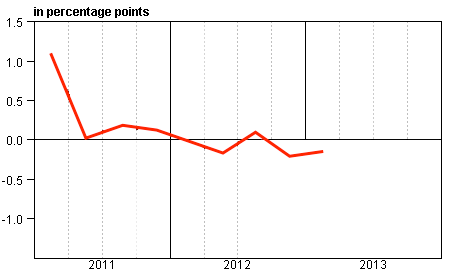 These figures pile pressure on the French president François Hollande, whose left-wing approach to austerity – focused around tax rises on the rich, rather than spending cuts on the poor – has been beset by problems; today is the first anniversary of his election, and it’s an ignominious way to mark it. With stagnation between the second and third quarters of 2012, the French economy is now 0.4 per cent smaller than it was when he took the job.

Elsewhere in Europe, Austria narrowly avoided recession – as narrow as can be, really, because GDP remained unchanged at 0.0 per cent after a contraction of 0.2 per cent last quarter – and the Czech Republic, which has been in recession for the last 5 quarters, contracted by 0.8 per cent.