After decades of failed housing policy, the UK is now facing a housing crisis. Currently, the UK is building around 100,000 homes fewer than is required to keep pace with demand each year which is one of the reasons we are experiencing high house prices. In fact, since 1959, the UK has seen a real term increase in house prices of 300 per cent; if the price of a dozen eggs had increased as quickly they would cost just under £19 today.

Current government forecasts suggest we need to build 232,000 houses per year but the problem is that the UK has only done this once in the last 30 years. The UK’s housing shortage must be addressed as a priority to unlock valuably needed economic growth and to improve the lives of people across the country. That’s why this year, Centre for Cities has focused on how to put place back into housing policy through our annual health check of UK cities, Cities Outlook 2013, sponsored by the Local Government Association.

One of the main problems is that housing policy is set on a national level, and house building incentives are applied too widely and do not take into account the specific housing needs of each city. Some cities need new homes while other cities have plenty of vacant housing stock but need funds to retrofit or reconfigure existing development. Cities need the freedoms and flexibilities to make decisions about how best to meet the particular needs of their residents. 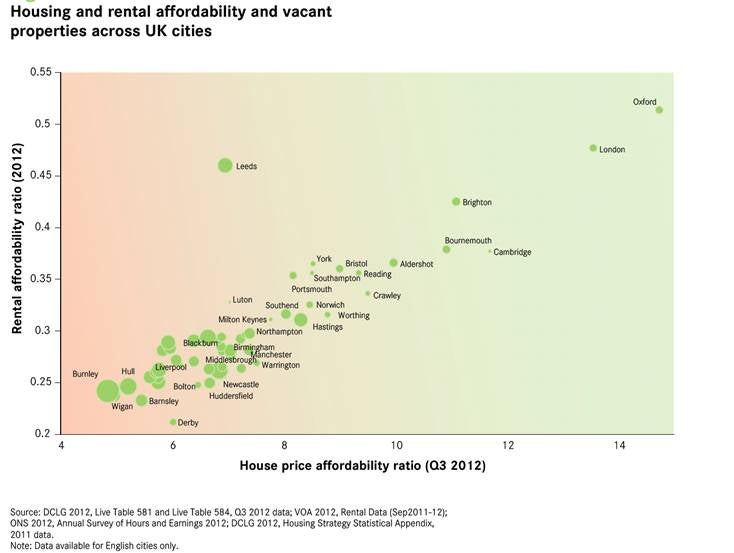 Cities such as Cambridge, London and Oxford, for example, are the most unaffordable places to become a homeowner in the country, while also experiencing relatively low vacancy rates. Restricting housing in high performing cities such as these will hurt economic performance as current residents can’t afford to buy, new people can’t come to live and work, and employers are restricted in personnel. In these places, policy should focus on increasing housebuilding.

In cities such as Burnley and Hull, where housing is most affordable but vacancy rates are relatively high, a focus on the supply of housing (except where there is a clear shortage of a certain type of housing) may not help the local economy. In fact it could have the reverse effect – the supply of housing could put a downward pressure on house prices which would hurt current home owners. In these places, policies to deal with vacancy and quality of housing stock are likely to be more beneficial as they can improve the quality of life of local residents, help make areas more attractive to businesses and potentially generate jobs in the form of retrofitting and refurbishment.

Boosting housing supply requires short term and long term policies. In the short run, there is the potential to provide quick boosts to the housing market which would also increase employment and improve economic performance. There are around 400,000 units on stalled sites across England and over 118,000 of these units are found in the ten most unaffordable cities. Initially prioritising these through existing policies, such as Get Britain Building, could provide significant economic benefits in the short term. The construction of 100,000 new houses could support around 150,000 jobs (of which 90,000 are in low skilled positions) as well as providing a boost to the national economy of around 1 per cent.

In the long term, issues such as opening up the house building industry, incentivising developers to use the land they currently have permission to build on and reforming the planning process will be important to increasing overall housing supply. Places should also be empowered to devise their own planning policies including, for example, the use of greenbelt land.

It will take time to reverse the consequences of decades of failed housing policy. However, the correct short term policy focus can bring quick wins for people, cities and the economy, while a focus on greater devolution of power and responsibilities to cities could help resolve the UK’s housing crisis over the long term, and deliver sustained benefits to the national economy.

Cities Outlook 2013, the flagship annual publication by the Centre for Cities, sponsored by the LGA is published today. Find out more details.