Yesterday Lewisham town centre was brought to a standstill as thousands of people took to its streets. They were voicing their their anger at proposals to close the A&E unit at Lewisham Hospital, and to downgrade the maternity service.

The proposals come after the South London Health Care Trust ran up huge debts following an expensive PFI Initiative – as detailed in Rowenna Davis’s New Statesman piece. However, that trust has nothing to do with the running of Lewisham Hospital – and there was clear anger among demonstrators that their local services were being cut in order to pay back a debt not of their making. 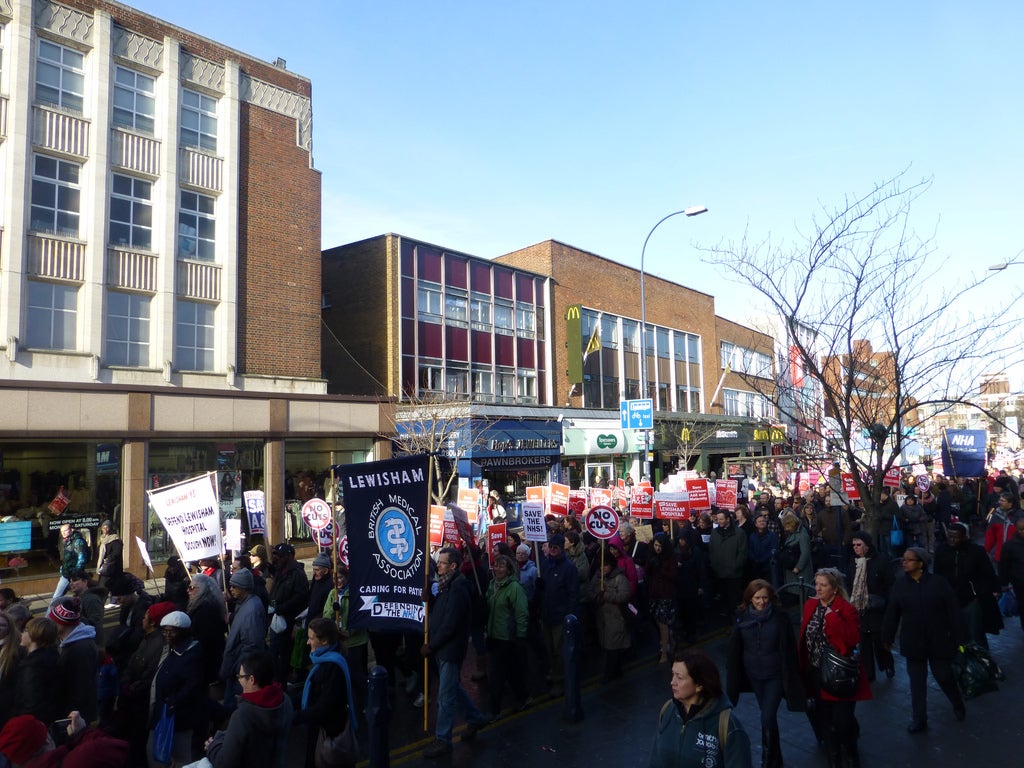 Matthew Kershaw is the special administrator appointed by Andrew Lansley to tackle the financial problems of the South London Health Care Trust. It was his proposal to shut the A&E Department (only months after it reopened following a refit) and that the patients should be moved to the Queen Elizabeth Hospital in Woolwich to save money.

On the march, Brighton-based artist and educator Bern O’Donoghue said: “Both my children were born in the hospital, and we’ve used the A&E loads of times. We wouldn’t have coped if we’d have had to go six miles to Woolwich. It’s a ludicrous plan and one which will have a hugely damaging impact on the community.” 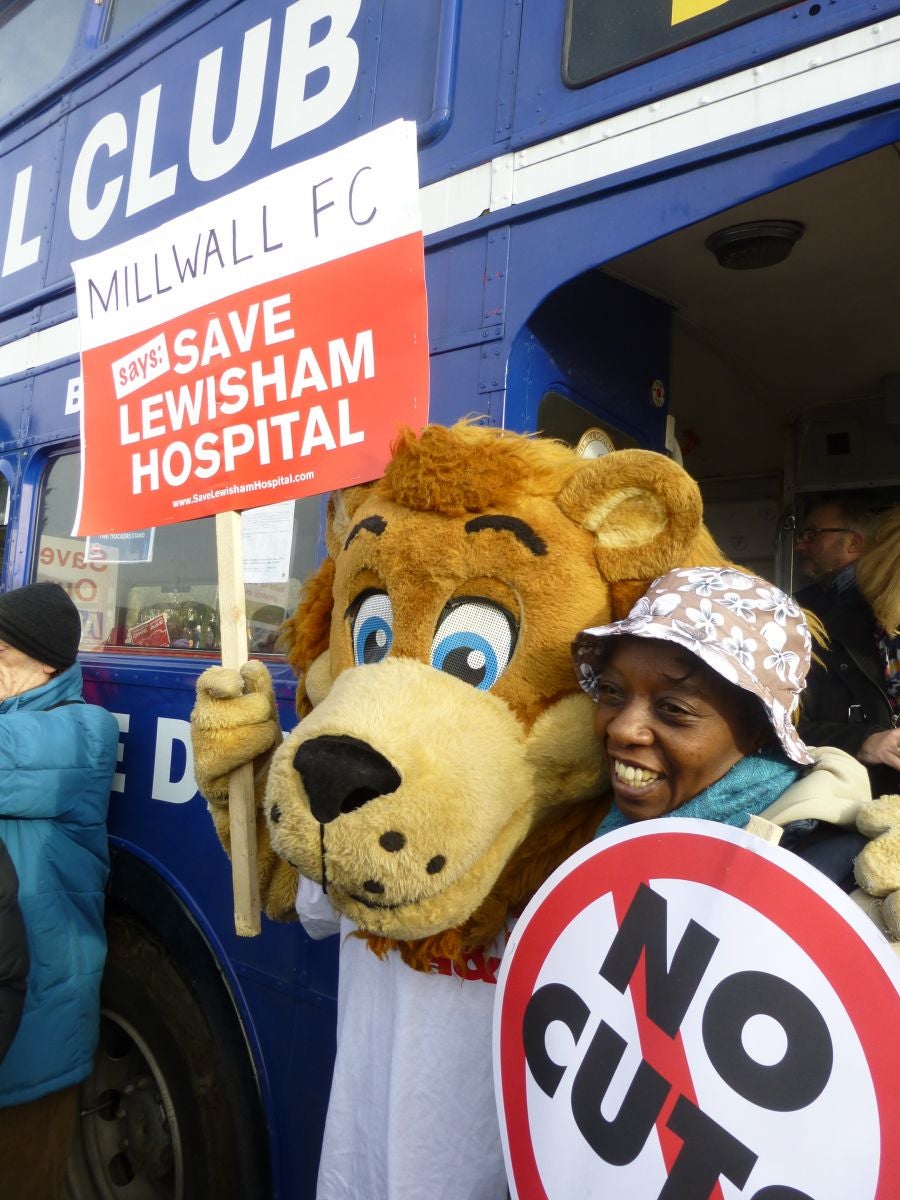 Many children on the demo were in buggies with ‘Born in Lewisham Hospital’ signs attached. I saw a mother marching with her children, carrying a placard saying “We’re here thanks to Lewisham A&E”.

Strikingly, the demo seemed to have brought together an incredibly diverse range of groups and organisations all united in opposition to the plans. I saw banners from various union branches and political groups, but there was also support from Millwall Football Club, who had even moved the date of a match so that their supporters could attend the demo. A local group called Islamic Awareness also displayed a Save Our NHS placard on their stall outside Lewisham Library as the demo passed by.  Even car drivers caught up in the march and unable to move were supportive, tooting their horns and cheering the marchers.

As the march passed by Lewisham Hospital itself, its staff – still in their medical uniforms – came out to applaud the demo, and were cheered in return. 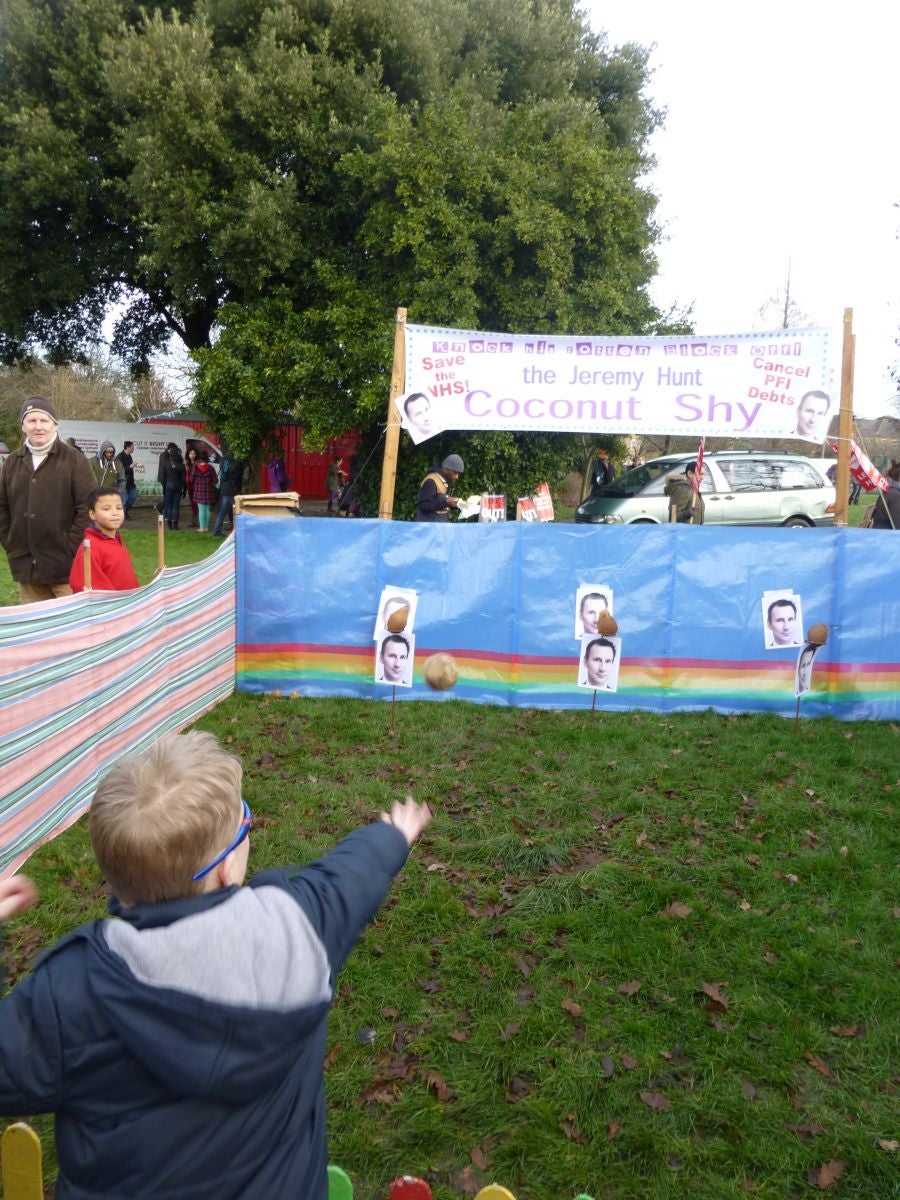 At the final rallying point in Mountsfield Park, the atmosphere was positively charged as the crowds arrived and people began to appreciate the sheer scale of the march.

And for those with frustrations left to vent, the Jeremy Hunt Coconut Shy was open, and doing a roaring trade.