For more than three years, unemployment has been at levels we haven’t seen since the mid 1990s. However, as many commentators have noted, there is little evidence of public sympathy for those experiencing the consequences of stagnant labour demand. A poll for Prospect earlier this year found strong (although not majority) support for cutting benefits to the unemployed. The British Social Attitudes survey shows that while in 2001 88 per cent of respondents said the government was mainly responsible for ensuring the unemployed had enough to live on, only 59 per cent thought this in 2011. And the coalition’s strategy of presenting increases in welfare spending as a consequence of the previous government’s profligacy rather than the economic crisis seems to have found a receptive audience.

In terms of public attitudes, unemployment seems to be unusual. How do we explain this? A common response is to look for explanations in underlying values or ideology: more individualism, less solidarity, a greater concern with personal responsibility, workers being duped by capitalist propaganda – take your pick. But there are some other reasons to expect unemployment to have a muted impact on public opinion, rooted in experience and expectations rather than values or ideology.

If you are currently in employment, what is the risk that you will lose your job and become unemployed in the next three months? ONS publishes experimental statistics on movements between different labour market positions (employment, unemployment and economic inactivity). The latest data shows a risk of moving from employment to unemployment of 1.4 per cent per quarter – in other words, 98.6 per cent against becoming unemployed. The risk is non-negligible but prior to the recession, it was 1.2 per cent, so we’re talking about an increase of 0.2 per cent.

(As a thought experiment, imagine a situation where unemployment is high but nearly everyone who is unemployed has been out of work for more than a year: the risk of becoming unemployed in the near future would be very small, however high the unemployment rate was.)

Analysis by Paul Gregg and Jonathan Wadsworth (in The Labour market in winter, Oxford 2011) indicates that the risk of unemployment due to job loss is lower now than in the last two major recessions (although it’s worth bearing in mind that, even then, only a small minority of the employed were affected). The reduction in the risk compared to previous recessions may help explain apparently low current levels of public concern. People in employment may, rationally, see unemployment primarily as something that happens other people. This will tend to make their attitudes to the unemployed more dependent on their altruism than on any sense of being personally implicated. And it may leave people more open to the suggestion that unemployment is due to some personal failing rather than to slack labour demand.

Job loss is not the main cause of unemployment

It is natural to think of unemployment primarily in terms of people losing their jobs, but people also become unemployed because they have entered the labour market from some form of economic inactivity and failed to find work. Over recent years this has been no less important a source of flows into unemployment than job loss, and apart from the sharp peak in job losses at the onset of recession, it has been more important since 2008 (see chart). While flows from employment to unemployment are still high compared to pre-recession years, more people are becoming unemployed because they have failed to establish (or re-establish) a foothold in the labour market- primarily people leaving education, but also parents moving back into the labour market to supplement loss of earnings by partners and people affected by new benefit conditionality regimes. 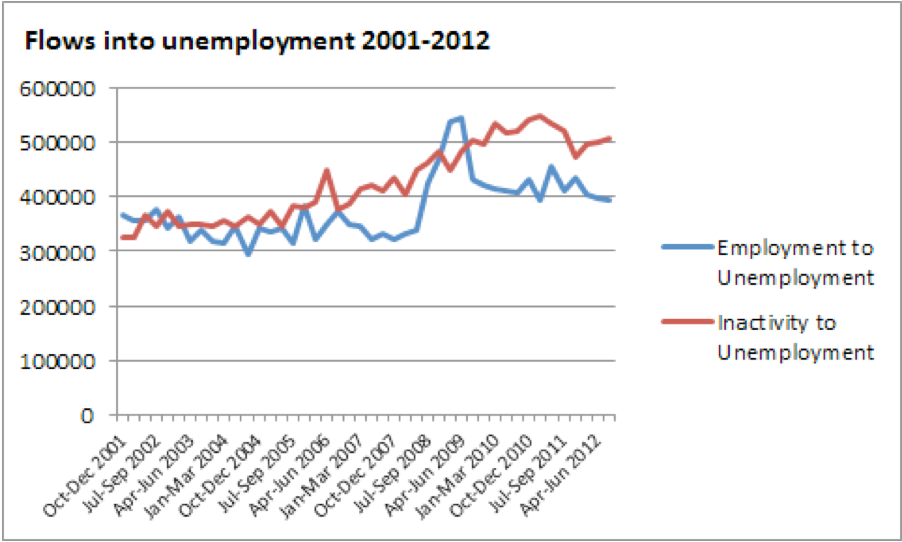 With the partial exception of people affected by benefit conditionality, weak labour demand remains the explanation for the increase in all flows into unemployment, from all origins. But because the risk is falling somewhat less on existing workers than on those entering the labour market, employed workers may be less likely to relate unemployment  to their own experience. Again, the chances that employed people will see unemployment as a collective risk to which they are themselves exposed is reduced, not because of false consciousness or a shift in underlying values but simply because that is not the situation they face.

In earlier recessions job losses not only made a somewhat larger contribution to unemployment, many of the losses  were highly salient in public consciousness due to high-profile industrial restructuring affecting unionised workplaces – factories, docks, mines – reinforcing the sense of unemployment as a national issue of concern to everyone. That brings me to my final point.

Unemployment is massively concentrated in certain types of occupation

The risk of unemployment is not evenly distributed over the workforce: generally, people in lower paid jobs experience more spells of unemployment even in the good times, and they are also more exposed to risks in the bad times, because they are more likely to be in sectors hit by falling demand and because employers are less likely to “hoard” their labour in the hope of an upturn than they are for higher-paid workers. The unemployment rates for different occupations give us a sense of the difference in risk exposure: former workers in elementary occupations have an unemployment rate of 12 per cent on the most recent data, compared to 3 per cent for those in managerial occupations.

As in previous recessions, manufacturing workers are among those bearing the brunt of low labour demand, with unemployment at 1.4 times their share of employment. But these workers form a much smaller share of the workforce, and of the general public, than in the 1980’s or early 1990’s. Unemployment increasingly takes the form of workers in low-paid and relatively precarious jobs not seeing their contracts renewed (if they have contracts at all), rather than finding their unionised factory is shutting down.

So if we want to understand why the public shows less sympathy for the unemployed than we might expect, there are some suggestive leads in the current and historical labour market data. If people are inclined to think of unemployment in terms of workers losing jobs , recent trends don’t fit the paradigm very well . The potent symbols of unemployment as a national issue – whole industries shedding labour, older workers losing jobs they had worked in since leaving school and communities losing their main source of employment at one fell swoop – are far from typical of current unemployment. And if personal interest plays any role in driving public concern – in other words, if people are not complete altruists – currently employed workers may quite rationally see unemployment as someone else’s problem. The overall effect of these changes may be to make unemployment a far more distant contingency than in the last two major employment downturns- and the distance is not just a matter of perception, but of objective risk.

If this attempt to explain public attitudes in terms of risks, expectations and public salience is right, there are positive and negative implications. The negative (for those on the left – reverse the sign if you’re on the right) is that the coalition may not need to worry too much about its remarkable record of stagnating  unemployment: enough of the public is far enough away from the risks to maintain the ugly fiction that unemployment is primarily a personal failure. On the positive side, the sort of deep-seated changes in public values or ideology – away from solidarity and equality, towards devil-take-the hindmost individualism – which worry so many on the left may be a misinterpretation of the evidence.  I’ve tried to suggest why people might react differently to a rise in unemployment without fundamental changes in values. The UK public may be no less nice or nasty, tough or tender than they were thirty years ago: they may just be, on balance, further away from the problem.