The FT‘s Jason Abbruzzese has posted the Moody’s Analytics estimates of the economic damage of Hurricane Sandy. The firm puts the cost of lost output at $19.9bn, and the damages at a further $30bn: 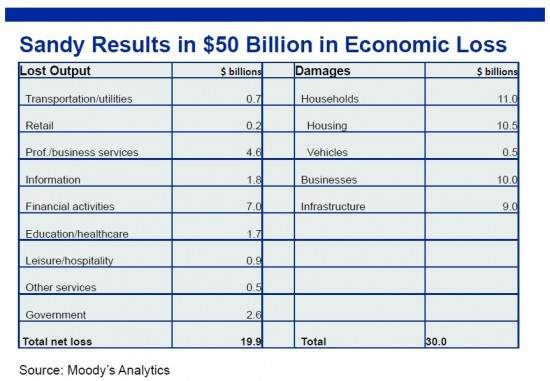 If the $50bn total turns out to be accurate, it will make Hurricane Sandy the fourth costliest US disaster behind Hurricane Katrina, the attacks of September 11, and Hurricane Andrew.

Putting a dollar amount on a disaster which has claimed nearly 100 lives in the US, and almost as many in the other countries throughout North America which have been hit, may seem distasteful, especially since the death toll is likely to continue rising. But that figure helps put in context stories like this, by Matthew Yglesias:

A 2009 seminar hosted at the Polytechnic Institute of New York University considered several options for major infrastructure upgrades to combat storm surges—a barrier at the south end of the Arthur Kill that divides Staten Island from New Jersey, an East River barrier to prevent surges up that narrow waterway, a barrier perpendicular to the Verrazano Narrows Bridge between Staten Island and Brooklyn, and most ambitiously a “Gateway Barrier System” stretching from Sandy Hook to the Rockaways. Engineers don’t believe it would be feasible for the Gateway system to entirely block storm surges, but it could weaken and deflect them—significantly reducing the flood risks to the entire New York Harbor…

It would, of course, be expensive. The estimates presented at the seminar suggest a ballpark figure of $15 billion. But even if that turns out to be a substantial underestimate, it’s a bargain compared to the cost of widespread flooding.