This chart, from JP Morgan via FT Alphaville‘s David Keohane, is quietly rather good news: 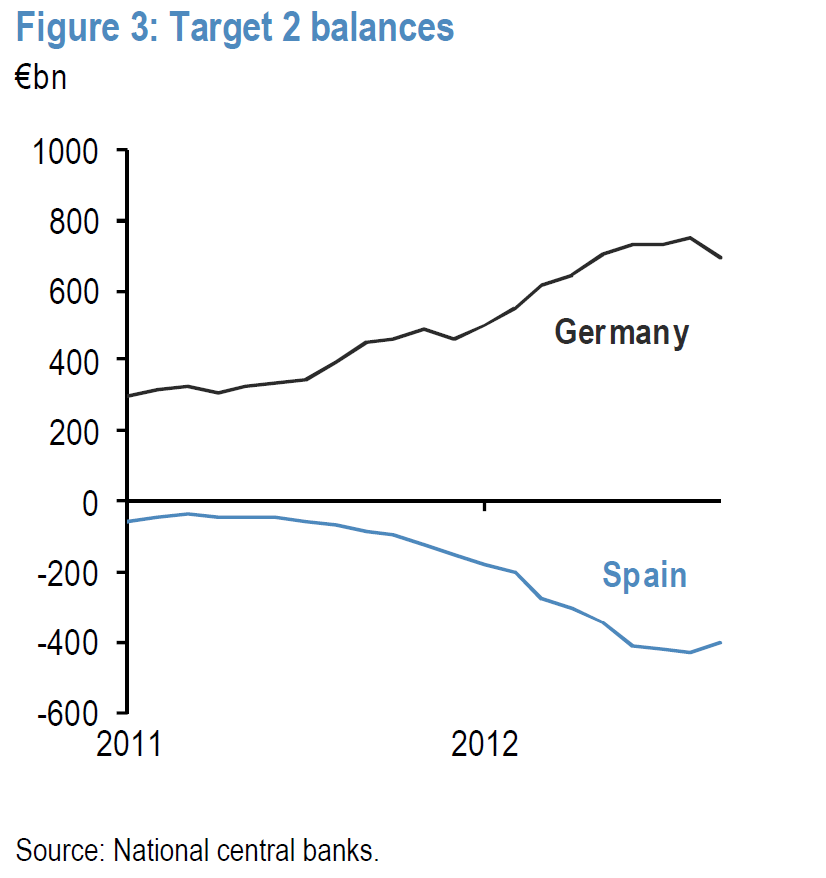 If a Spanish supermarket buys beer from a German brewer and pays with a bank transfer, then the euros aren’t just sent directly from one account to the other. Instead, they are channeled through the countries’ central banks. The German brewer gets money from their bank, which gets the money from the Bundesbank, while the Spanish supermarket owes money to their local bank, which owes money to the Banco de España. The two central banks then settle those debts with the ECB, and that’s the where TARGET2 comes in. Over the long-term, these debts and credits don’t always even out, and so countries end up with balances with the ECB.

The chart above shows that the long-running trend for Germany to have ever-increasing credit, and Spain ever-increasing debt, may now be reversing. This is a good thing, because one of the few silver-linings of the crippling austerity the Spanish people have experienced over the last year is that the so-called “internal devaluation” – the reduction of wages in the country – is supposed to increase the strength of exports.

The TARGET2 trend also indicates that fears of a Spanish bank run are unfounded. While it doesn’t leave the country in the all-clear – if people are taking money from banks in cash, it wouldn’t show up on this account – it bodes well for the health of the banking sector.

But the most important aspect of TARGET2 for the eurocrisis as a whole is that it provides a mechanism for mechanical exit of the euro. We wrote about this in May with regards to Greece, but the short version is that if the debt gets too big, the ECB can decide to simply stop lending to the country. If that happens, the state is all but ejected from the euro in a stroke.

Greece may not be out of the water yet, but the knowledge that Spain is, for the time being, perfectly safe in the eurozone will help the country get its bearing. It still leaves Rajoy with the tough decision as to whether or not to officially request a bailout, but his hand is no longer as forced as it was.