Last year, as inflation rose to more than 4 per cent (it eventually peaked at 5.2 per cent last September), a band of right-wing commentators and economists demanded that the Bank of England hike interest rates in an attempt to bring prices down. Andrew Sentance, then a member of the Bank’s Monetary Policy Committee (MPC), bemoaned “the lack of a substantive policy response to persistent above-target inflation” and warned that “if we do not start to raise UK interest rates gradually soon, we risk having to do so more aggressively in the future”. A fearful leader in the Spectator declared: “Inflation is back with a vengeance…Britain is once again in an inflationary cycle…For how much longer can high inflation be described as a blip?”

Others, however, including New Statesman economics editor David Blanchflower, argued that the spike was largely due to temporary factors such as the VAT increase, higher global commodity prices, and the depreciation of sterling, and predicted that inflation would fall back in 2012. In February 2011, in a piece entitled “Stop worrying about inflation”, Blanchflower wrote:

Inflation is going to collapse in 2012 when the impact of the one-off increase in VAT, oil and commodity prices and the exchange-rate depreciation mechanically drop out of the inflation calculations. As Mervyn noted in his recent speech, these three items alone account for 3 per cent of the current 3.7 per cent CPI inflation rate.

Well, the results are in and it looks like Blanchflower was right again (as I’ve noted before, he was one of the few economists to warn that George Osborne’s excessive austerity measures would trigger a double-dip recession). Inflation, as measured by the Consumer Price Index, was just 2.2% last month, the lowest level since November 2009 (see graph below) and only 0.2 per cent above the Bank’s target rate. 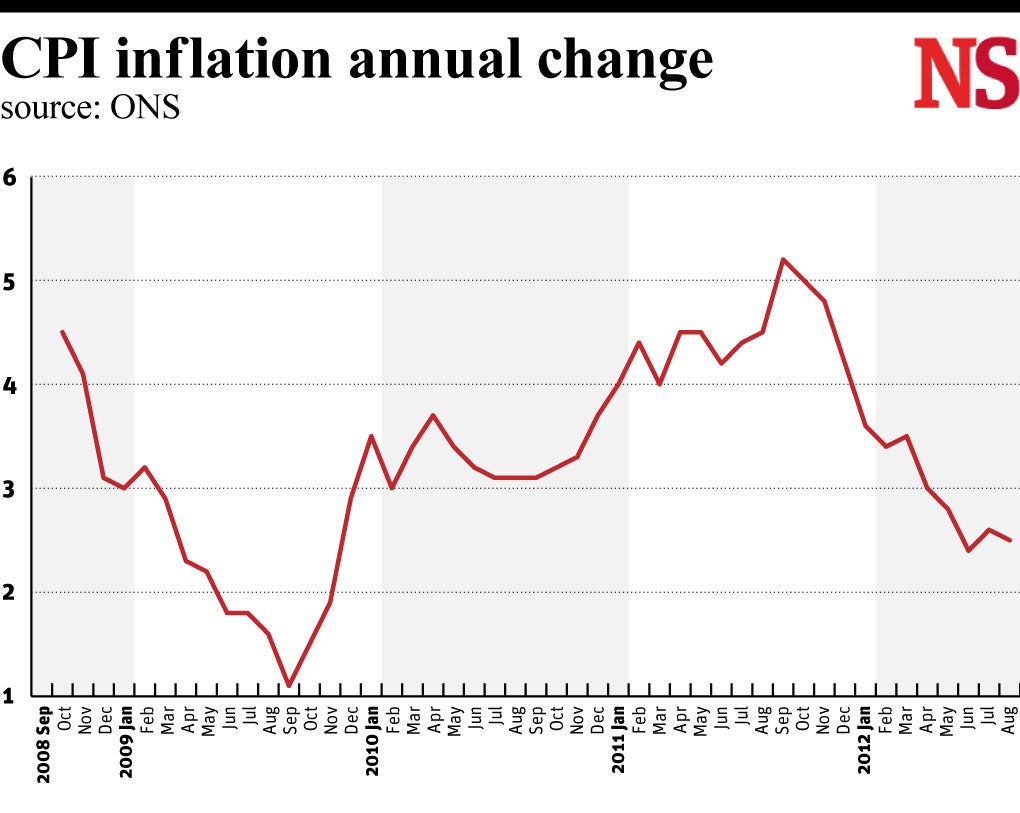 Inflation is expected to rise over the next few months as this year’s round of energy price increases take effect, but it is still likely to remain close to the 2 per cent target rate (which should, in any case, be raised). This should prompt the Bank to keep interest rates at their record low of 0.5 per cent and consider a third round of quantitative easing. As in the US, where Federal Reserve chairman Ben Bernanke has pledged to keep rates near zero until at least mid-2015, sustained monetary stimulus is needed to support growth and employment, not least when the government’s fiscal policy remains so determinedly self-defeating. While it appears that the economy returned to growth in the third quarter, the danger of a contraction in the fourth quarter (a triple-dip recession) remains. Had the Bank listened to the inflation hawks and hiked rates, the UK would have suffered an ever deeper double-dip.