Cameron’s claim yesterday that “the good news will keep coming“, while (probably) a mild abuse of his privilege in having seen the GDP figures early, was proved true today. Sort of.

The good news is that we are out of recession; the economy grew by 1.0 per cent over the last quarter. Indeed, given the revisions to previous quarters, that’s enough to cancel out the contraction from the quarter before. That is good news, at least insofar as not leaving recession would be very bad indeed.

The bad news is that we are emphatically not out of the doldrums yet. The economy may have recovered from the second, austerity-led recession, but it leaves over-all growth for the last four quarters almost exactly flat (in fact, the economy is still 0.1 per cent smaller than it was at the end of Q3 2011).

As for the economy finally regrowing back to the size it was in 2008, well, there’s a long way to go. The classic NIESR graph details just how big the output gap is: 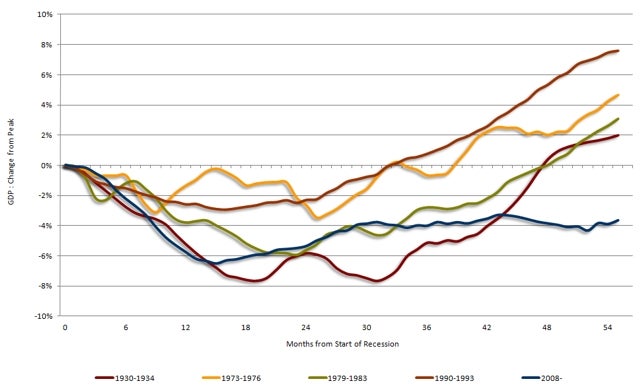 Interestingly, the ONS refused to quantify the effect of the Olympics over all on the GDP figures, but did say that the effect of ticket sales particularly was likely to be a significant part of the growth. Owing to the way the statistics are counted, those sales are not counted for the quarter in which they are made, but the quarter in which they are used. There was, in effect, a transfer of consumption from mid-2011 to mid-2012, and that can’t have failed to have an effect. The statistical bulletin reads:

Tickets for the Olympics were sold in tranches through 2011 and 2012 but, in accordance with national accounts principles, these have been allocated to the third quarter, when the output actually occurred. The impact of the ticket sales on GDP can be clearly seen in the lower level data for sports activities, which is part of the Government and other services aggregate in Table B1. Ticket sales were estimated to have increased GDP in the quarter by about 0.2 percentage points. (Emphasis mine)

The agency also urged commentators to look at the growth figures for a longer period than the quarter-on-quarter releases. Coming so soon after Cameron’s no-quite-leak, it’s hard not to read that response as putting the Prime Minister in his place.

“This may be a good quarter, Mr Cameron, but don’t celebrate just yet.”