Channel News Asia‘s Olivia Siong writes about the opening of what appears to be the world’s first commercial vertical farm:

The technique uses aluminium towers that are as tall as nine metres, and vegetables are grown in troughs at multiple levels. The technique utilises space better an advantage for land-scarce Singapore. Sky Greens farm first started working on the prototype in 2009, and has opened a 3.65-hectare farm in Lim Chu Kang.

The farm currently has 120 vertical towers, and hopes to increase the number to 300 by next year. This will increase its current daily supply of vegetables from 0.5 tonnes to two tonnes by 2013.

“The challenge will be to get investors interested. This type of farm needs (relatively) higher capital,” said Dr Ngiam Tong Tau, the chairman of Sky Greens. “This is a new system, so people need to be trained (and) we need to attract people to come here to work.”

The farm’s expansion is expected to cost some S$27 million. Currently, about seven per cent of Singapore’s vegetables are grown locally.

The site has a photo of the farm, while more are available at inhabitat: 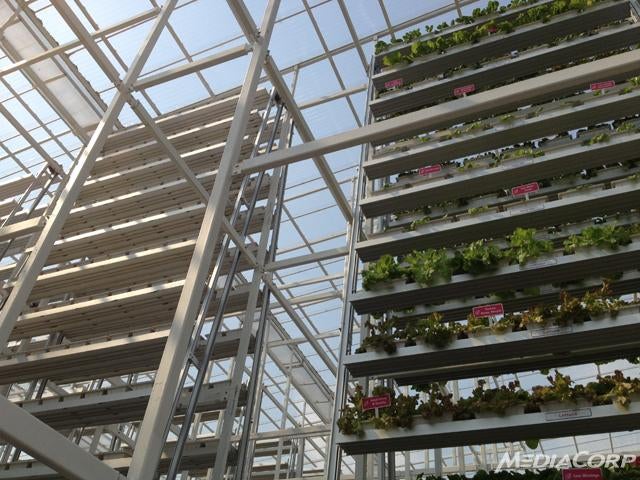 Vertical farming is of questionable utility at present, but as with so many things, where Singapore goes, the rest of the world may follow. As pressure for locally sourced food squares up against the continued growth of urban populations worldwide, the technology may let off some of that pressure.