As seen last week, employment has fallen by only 1 per cent since 2008, in spite of a 4 per cent drop in GDP over the same period. As the number of hours worked rises and output decreases, it can only be concluded that people are producing less per hour. 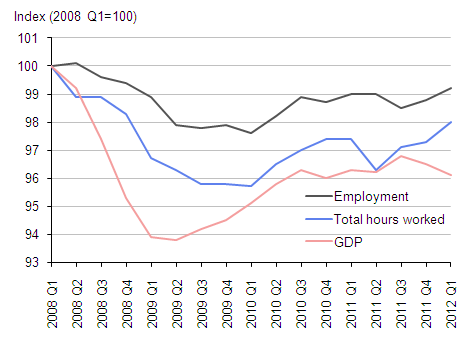 This stands in contrast with previous recessions, when productivity progressively increased. This has led economists, including the ONS, to probe into why this is happening.

Firstly, Grice suggests that this phenomenon could be linked to the growth of part-time and temporary jobs.

In particular, the author notes that the increase of part-time work to the detriment of full-time jobs has led to a smaller increase in hours worked than number of jobs would suggest.

Full-time and part-time employment (people aged 16 and over) 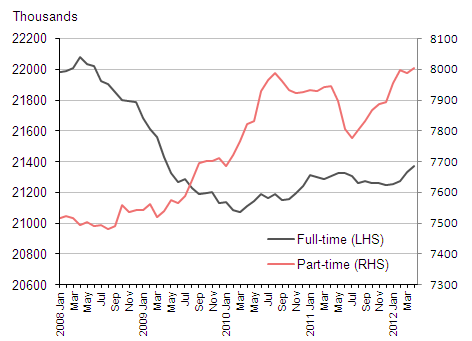 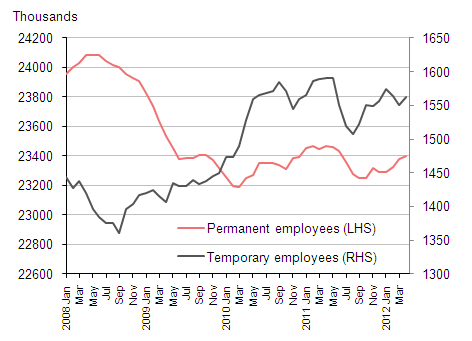 The proposed hours-to-jobs ratio decline is seemingly confirmed by the rise of the proportion of people who are forced into part-time or temporary work for lack of full-time, permanent options. 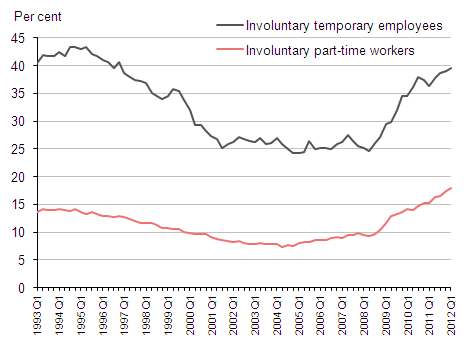 This, Grice notes, suggests that the UK market has adjusted to the recession by becoming more flexible.

There is also evidence to support the idea that companies have been reluctant to shed employees, in spite of the dip in output. The rise in real income has significantly slowed in the last ten years (in large part due to the wage adjustment resultant from a more flexible labour market), making it more affordable for companies to maintain staff levels.

Earnings growth, quarter on same quarter a year ago 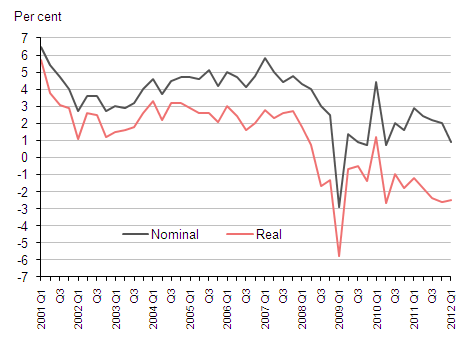 Furthermore, as the cash flow for non-financial companies shows – unlike in previous recessions – firms have remained financially buoyant enough to retain employment. 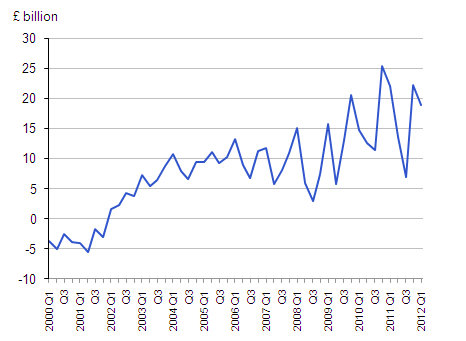 Finally, the report draws attention to the notable rise in self-employment, perhaps as a direct consequence of lay-offs. However, it is stressed that the exact effects of this rise on output and hours worked remain unclear. (I’ve been told by the ONS that a break-down of self-employment jobs by industry will be published from next month onwards – it’ll be interesting to see whether these “newly self-employed” are genuine entrepreneurs, people who are basically unemployed by another name, or just corporate attempts to dodge the statutory rights conferred to the elusive, and rather narrowly defined, “employee”.)

Self Employment as a percentage of total employment 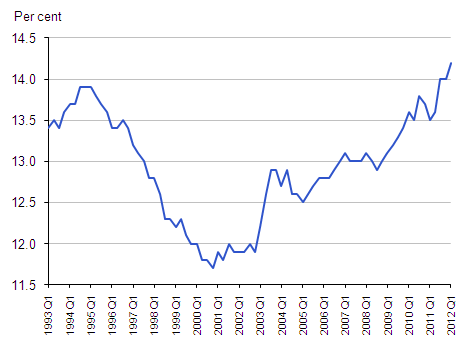 The report goes on to conclude that while the aforementioned reasons may play a significant part in explaining the mystery (further research is being done to confirm this), it is important to consider other issues.

For instance, some commentators have attributed the paradox to consistent under-reporting of GDP. However, the ONS admits that this is unlikely, as previous periodic assessments of GDP revisions haven’t shown any significant bias. Grice does concede that the survey data may be out of sync with GDP estimates, as the former can give information about future trends, while the latter are necessarily based on past tendencies. Nonetheless, some pundits believe that the GDP doesn’t reflect the strength of PAYE and/or tax receipts. But the report contends that the ratios do not seem abnormal:

Ratio of PAYE and VAT receipts to GDP 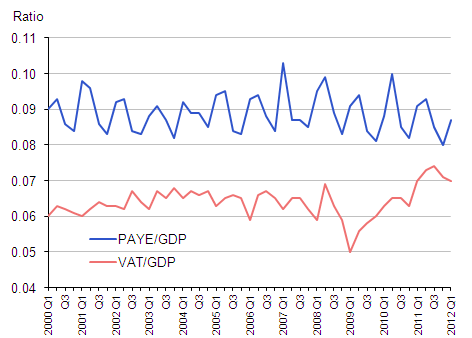 Moreover, when compared to productivity across Europe, the UK conundrum seems less puzzling. Registering the same trends as its continental counterparts, the drop in British productivity, argues the ONS, could very well be explained by common international factors. 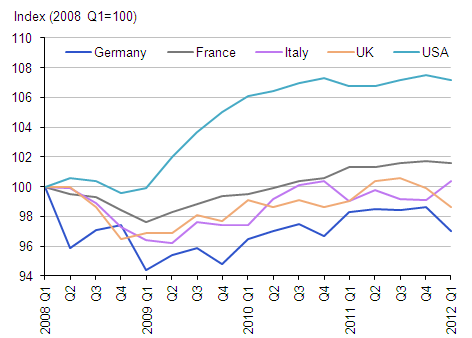 Following reports by the OECD and IMF, the ONS speculates that the financial crisis may have altered the UK’s productive potential. While acknowledging that there were many forces at work during the crisis, Grice points to a few main factors that may have contributed to the current recession’s exceptionalism.

Firstly, the author argues that “over-exuberant financial intermediation” led to the investment of resources in activities with poor returns. It is argued that as a consequence, we are now left to deal with shoddy machinery and poorly trained individuals. Secondly, due to the drop in financial intermediation after the crisis, firms lost access to financing that would boost productivity. Finally, the report states that because the risk premium increased so significantly after the crisis, existing capital stock was rendered unviable because it was unable to generate the required return at the higher rate.

The ONS concludes that all the aforementioned explanations are likely to play a role in explaining the dip in productivity, and that each one warrants further, extensive research.