Our exclusive story on how once supportive economists have turned against George Osborne has made the front page of today’s Guardian, with the rest of Fleet Street, including the Mail and the Telegraph, also following up the piece, which appears in full in this week’s magazine. 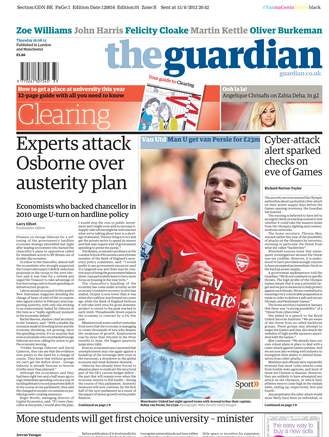 The Guardian leads on this week’s New Statesman cover story.

We need to look again very carefully at the implications of the sharp reduction we have seen in capital expenditure.

There are a fair number of people who think that if we returned to the plans as conceived by Vince Cable . . . we would be in a slightly healthier position than we are.

Pugh is right. Osborne’s decision to reduce capital expenditure – the most valuable spending, according to the OBR – by 48% (£24.3bn) is one of the main reasons why the UK, with the exception of Italy, is the only G20 member in recession.

When it was pointed out to Pugh that it would be difficult for the Chancellor to perform such a U-turn, he rightly replied:

The situation is serious enough now for people not to be bothered about what you call the plan.

Two other MPs – Annette Brooke and John Leech – make similar calls, and a senior economic adviser to the party comments: “We may have to resort to emergency measures to stimulate demand. We have already let the timetable on eliminating the deficit slip: we may have to do that again.”

Perhaps most significantly, Stacey reports that party president Tim Farron is being urged by the Lib Dem leadership to call for deficit-funded spending “in order to give Nick Clegg, the deputy prime minister, a mandate to argue for it at the top of government.”

The Lib Dems’ restlessnes is unsurprising. As even the IMF has stated, there is no evidence that a reduced pace of deficit reduction would trigger a rise in British bond yields. With investors increasingly reluctant to lend to eurozone countries, the UK is, as Osborne has observed, a “safe haven”. Yet, for no other reason other than political pride, the Chancellor is unwilling to change direction. Borrowing for growth would be a tacit admission that his nemesis, Ed Balls, was right and he was wrong. But until Osborne is prepared to take this step, there is no prospect of recovery, for either the economy or his party.