One of the problems fiscal conservatives have is that most of them can’t actually agree about what they are conservative about. Debt? Deficit? Absolute, or relative? And how should we talk about the issue?

For instance, one would guess from their name that deficit hawks care about the deficit – that is, the amount that a country spends each year in excess of the amount of revenue it receives, officially called (in Britain, at least) public sector net borrowing (PSNB). Last year, PSNB stood at a shade over £120bn, and this year, it’s forecast to be £91.9bn. That’s the government’s deficit reduction strategy at work, albeit at far slower work than we were promised in 2010.

But other fiscal conservatives go after debt (the official measure of which, Public Sector Net Debt, stands at £1.03trn). Fraser Nelson, for instance, condems the elision between the two in today’s Telegraph:

Cameron faces the same problem. He says he is “dealing with the debt” when he is actually increasing the national debt by as much as Labour proposed: an almighty £600 billion. But he has not yet been rumbled. An unpublished YouGov poll by Policy Exchange, taken after last year’s Budget, found that just 14 per cent of voters realised the national debt is rising. Another poll, released this week, found that only 10 per cent see what’s going on. Now, just as under Labour, ministers play word games and talk about “cutting the deficit”, knowing that most voters will hear “cutting the debt”. Astonishingly, almost half of British voters think that debt is falling.

It’s certainly the case that debt is rising, and will be rising for some time. And confusing debt and deficit – as, say, Nick Clegg does – is unacceptably economically illiterate. But it’s unclear how, exactly, being a “debt hawk” would work.

It is emphatically not the case that Britain can begin reducing its debt any time soon. For all that Nelson attacks the government for increasing the national debt, to reduce it would entail turning a deficit into a surplus overnight. Just considering the pain involved in entering into a seven-year deficit reduction program, doing it any faster would be politically impossible.

And in fact, given the various multipliers in effect from government spending, it may be economically impossible as well. There is strong evidence to suggest that the mere fact of trying to cut the deficit too quickly led to the contraction we’re now experiencing; and that contraction has reduced government revenue and increased mandatory spending to a degree that makes it difficult to do any deficit reduction at all.

Being a debt hawk would thus seem to necessarily imply being a deficit hawk, at least for the time being. When – if – the structural deficit is eliminated, then the two groups can argue over whether debt should start being reduced; but while there is a deficit, it’s silly to pretend that national debt going up is somehow surprising, and unless you want to go full Paul Ryan, you aren’t going to get rid of it in a year.

All of this confusion is compounded by the fact that if it’s unclear what we ought to be trying to reduce, it’s doubly unclear how we ought to go about measuring it. Debt hawks favour quoting absolute figures, like those I’ve used at the top of the post, because frankly one trillion pounds sounds a lot more than “65.7 per cent of GDP”. Yet the latter is probably a more accurate representation of where we are; for one thing, it allows us to accurately compare the economic situation with similar ones from history, as this chart (from Wikimedia Commons) does: 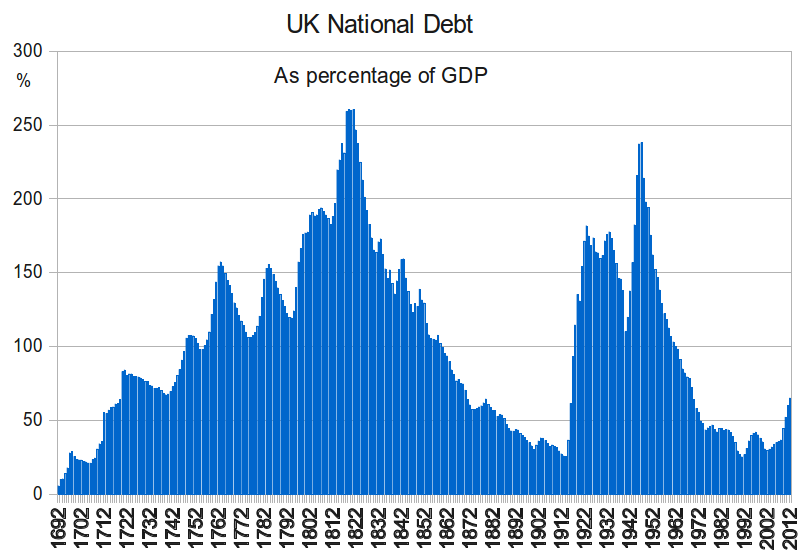 And for another, it conveys an important truth about the debt, which is that we can shrink it in two ways: either by paying it off, or by growing our economy big enough that what’s remaining doesn’t matter. This is the truth behind arguments over “deficit reduction versus growth”.

But there is an even better way to discuss the national debt that in terms of a ratio to GDP, and that is in terms of it’s cost.

The only downside to having debt is that you have to pay interest on it. But more debt doesn’t necessarily mean higher interest payments – in fact, it’s the exact opposite. Joe Weisenthal explains:

Using data from Bloomberg, we looked at basically all of the big emerging and developed markets* with a big bond market, and good data on debt to GDP and decided to check to see if there was any connection at all between debt to GDP and the yield on their 10-year bonds.

The answer, quite clearly, is no.

In fact, using an exponential regression, we detect a slight shift down and to the right, meaning that the more debt a country has relative to its GDP, the cheaper it is to borrow.

As debt goes up, interest rates go down. So doubling debt doesn’t double interest payments, and halving debt doesn’t mean you pay half as much servicing it. In chart form, that claim looks like this: 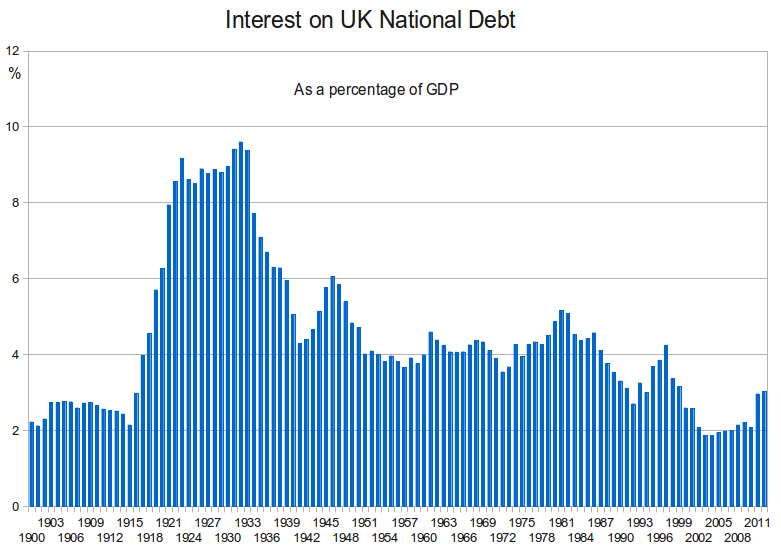 Our interest rates are so ridiculously depressed at the moment that even though we’ve almost doubled our national debt to GDP ratio, the amount we pay to service our debt has barely gone up by half.

This is what the debt hawks should be looking at. Not debt to GDP, and certainly not absolute debt; nothing matters to debt except the cost of holding it. And that cost doesn’t present a particularly compelling reason for cutting it.