Paul Krugman uses the Eurostat figures on European debts and deficits to do a rough-and-ready calculation of the effects of austerity on GDP growth in the EU: 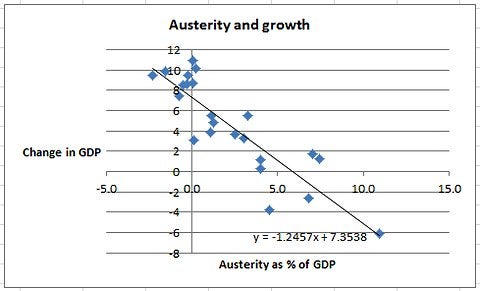 The measure of austerity on the graph above includes budgets reduced in real, not just nominal, terms. If GDP in a country rockets up, and the budget stays flat, Krugman attributes this to austerity in just the same way as how, in the UK, GDP has stayed flat as budgets have plummeted.

From this model, he infers that cutting budgets by 1 per cent of GDP reduces GDP by around 1.25 per cent.

There is then a feedback mechanism that kicks in (if GDP is reduced, then the deficit is reduced by less), all of which means that his model predicts that £1 of austerity reduces the deficit by £0.40.

None of this will come as a surprise to the economists working at the Office for Budget Responsibility, who have been struggling with just this effect for the last two years. A large part of the perennial downwards revisions of their predictions for GDP growth, and the upward revisions of their predictions for deficit reduction, will have been due to the stagnation in the UK economy since 2010 – stagnation which, if Krugman is to be believed, is due to the austerity the UK has experienced.

By now, at least, the OBR seem to have begun to include the correct amount of pessimism in their forecasts. The office’s March 2012 prediction for the deficit (or public sector net borrowing, PSNB) for 2012/13 was spot on, at £126bn. This is a long way off the rather more optimistic prediction made following the chancellor’s first budget in 2010, when the deficit was expected to be £10bn less by now. Whether the new predictions will hold we shall see, but even if they do, they require for another five years of harsh austerity to pull off.