The Register reports on new statistics released by the coding site Interview Street which illustrate the dominance of developing economies in the field of information technology.

The site offers jobseekers tricky coding challenges to solve, with the idea being that the coders who have objectively demonstrated their merit will get picked up by big tech firms (it seems to work; Business Insider claims that Facebook and Zynga recruit from the site). They also have leaderboards, with the best candidate’s countries listed. And guess who dominates the boards: 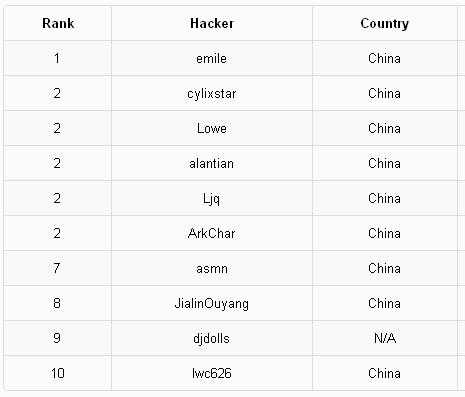 It’s not just China. Over half of the top fifty hackers (that’s “proficient at using computers”, not “cyber-terrorist”) are from BRICS countries, and although the US makes a showing, the highest Briton is 79th. Well done anyway, “srowley”.

UK real wages have fallen at a record rate

The Register’s Phil Muncaster argues that our poor form is a consequence of the decline in focus given to science and technology, writing:

The government’s announcement last year of an overhaul to GCSE and A-Level exams to include more focus on coding and programming is a step in the right direction but fails to address the basic fact that sci-tech courses don’t have the requisite cool to attract large numbers of students.

Of course, China’s lead may mean little if they continue to cordon their citizens off from the rest of the internet. Unless, that is, their lead in computer science is viewed, not as an economic issue, but as a military one. The great international relations scholar Joseph Nye warned today:

The world is only just beginning to see glimpses of cyber war – in the denial-of-service attacks that accompanied the conventional war in Georgia in 2008, or the recent sabotage of Iranian centrifuges. . . It is time for states to sit down and discuss how to limit this threat to world peace.