So, for this post, I did high-tech, mass market dating through the OKCupid "Crazy Blind Date" app. As regular readers can probably imagine, I'm at heart much more of the sort of organic, free range, farmer's market type at heart, so I was a bit nervous about this one, and not just because the last girl I met through OK Cupid tried to gnaw my finger off.

It's all a bit odd. The core idea is your smartphone is better at finding the love of your life than you are. I was sceptical, but it's certainly better at finding its way around London than I am, so I was willing to give it a go.

The phone uses your OK Cupid dating profile - where you answer a huge amount of questions, to get your views on certain subjects - to match you with other people using the app. You then post up that you are willing to go on a date with anyone, at a particular time, at a particular place.

All you can see about the other person is one sliced up photo of them, and your OK Cupid match percentage. Hence, "Blind Date". Unfortunately, what adds the "Crazy" is the fact that the match percentage is a somewhat blunt tool, and you know *literally nothing else* about the other person. For an example of how wrong that can go, here's an example of conversation between two people who are (in theory) 92 per cent matches: 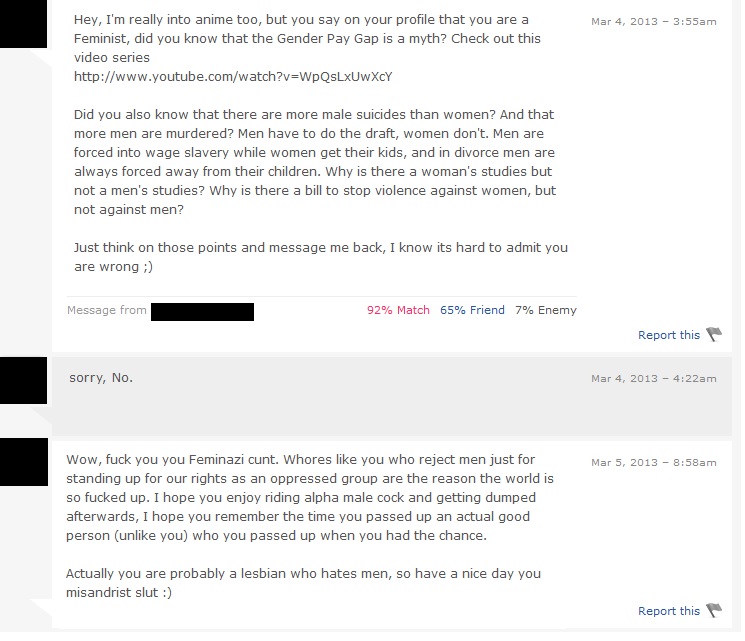 Now, I'm pretty sure I wouldn't want to meet the man in question, and fortunately, the normal online dating process prevents this, because, you know, he comes across as a psychopath in the chat messages. The smiley face after describing someone as a "Feminazi misandrist whore cunt-slut", makes me seriously worry that this bloke has pile of skulls in his house. That he talks to.

Of course, with Crazy Blind Date, you could get a variation on this bloke every week for a month (assuming you survived). Still, for you dear readers, I pressed on. After a week or so of trying to arrange a date, I had no-one interested. It's an oddly cold experience - even colder and more mechanical than normal online dating, as the amount of human interaction is cut to an absolute minimum.

This is online dating as I imagined it before I had tried it. Chill, clockwork and weird.

While using the app,I found myself wishing I was just doing normal, regular, real dating, with a person I met by chance. On that note, one of my favourite, most touching stories, of how people met their partners, is from one of my devoutly religious friends. After a bad romantic experience, he found himself in a new church - he'd just moved house - and he got on his knees that Sunday, and literally prayed for a lovely girlfriend.

He then headed home from the church, and started to unpack and move in properly. Anyway, under the bed in his new room, he found a fairly large box. Opening it, he found a pair of what can only be described as kinky, thigh length, leather sex boots. Obviously, this was a little eyebrow raising for a good church-going boy, but at that point the doorbell rang, and he went downstairs to answer it, and standing at the door was a gorgeous woman, who sheepishly said she was the former tenant and she'd realised she'd left something under the bed in her room. Could she come in and get it?

He invited her in to return her kinky sex boots to her, offered her a coffee - and three years later, they are living together, and blissfully happy. Turns out, she's exactly the same kind of Anglican he is, and everything. Just with added kinky sex boots. It's the most convincing proof of the existence of the Divine I've ever seen. Sadly, as an atheist, I was having to rely on technology to fill that role in my life.

So, after a week of using the app, I was getting nowhere, and with a rare free Saturday night, I decided to head to the O2 to watch a film, as it was (somewhat randomly) the only convenient place in London that was showing this particular low-budget indie movie. Anyway, while out at the O2, my film buff "date" for the evening (a good female mate) asked me how the blog was going, I told her, and showed her the app while we were on the Docklands Light Railway (DLR), a monorail that goes out to the East End of London.

We were at the point where the DLR goes from skyscraper shrouded future monorail, to monorail through blasted post-apocalypse wasteland picked over by mutant biker gangs, and it was exactly at that point that my friend noticed a lady who was an 81 per cent match with me was looking for a date at the O2 that night. Cajoled & given permission by the cinema friend, I messaged the Crazy Blind Date lady, and we arranged to meet. Alarm bells rang as soon as she said "Lets meet in the Harvester - they do lovely food there".

So, while my chum went off to watch a movie I quite fancied, I went to the O2 branch of Harvester to meet someone my iPhone thought I had an 82 per cent chance of liking. We met up - she lived locally to the O2, went to loads of live shows there. She was there that night to see Plan B. Anyway, we chatted pleasantly for about an hour, and then went our separate ways.

She didn't like film ("why would you go to the cinema when you can see it on DVD in a couple of months?", loved English white rappers and X Factor winners to the exclusion of all other types of music, wasn't interested in politics or current affairs and, final nail in the coffin, hated cooking ("Ugh, all that washing up - makes the kitchen so messy"). It wasn't that she was in any way nasty - she wasn't the the skull worshiping psychopath of my nightmares - just we had almost literally nothing in common, apart from really liking an unlimited (and surprisingly good) salad bar.

You'll be pleased to learn I made the 9pm showing of the movie, though:) Anyway, see you again on Friday morning for sleazy Facebook/Linkedin Hookup app Bang with Friends... where I manage to find a use for Linkedin!

Willard Foxton is a card-carrying Tory, and in his spare time a freelance television producer, who makes current affairs films for the BBC and Channel 4. Find him on Twitter as @WillardFoxton.